Wayne and Sarah eventually arrived in South Africa on the 9th September 2015 after many emails and much anticipation. The plane landed at lunch time so we had some time to get out to camp and have a few sighters. On our way out we stopped for a delicious meat pie at nanaga. 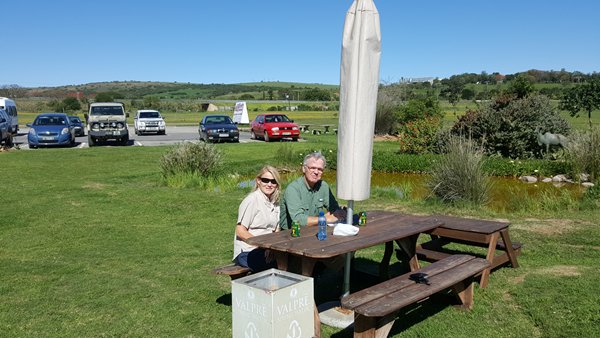 Then on our way to our river bush camp - after unpacking and settling in to the room we headed up to the shooting range. Sarah first up ! 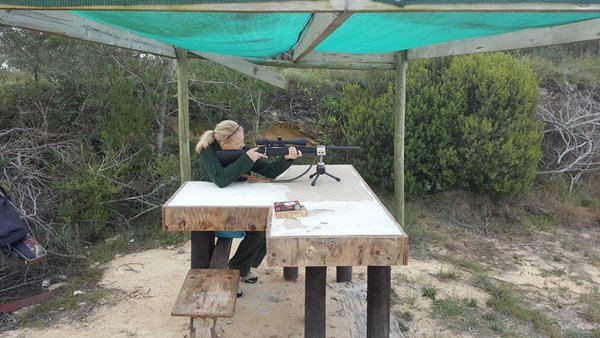 All was good at the range ! The evening we chatted about the hunt planned and after a fairly early meal we retired early.

Day 1 - One of Wayne's priorities was a kudu - so we started early at Leopard Ridge. Kudu at this time of the year are fairly difficult and we spotted several cows and young bulls but nothing to go after. It was warming up - we had spotted a few black wildebees bulls on their own so we decided to have a closer look. The first group were a group of youngsters and the second group we approached was 3 mature bulls. We snuck up on them and Wayne made a great shot and this magnificnt bull ran 300 yards and dropped over. 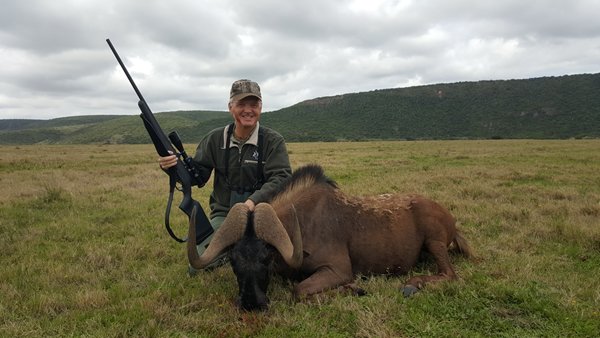 Wayne's first African animal and he was blooded ! 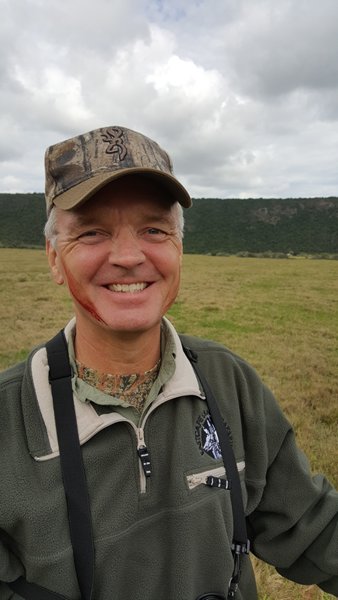 We were all super happy and loaded up the animal to take to the shed for skinning and caping. A good morning and we drove back to the lodge for lunch. It wasn't long and we were back out looking for kudu again. We had been seeing quite a lot of Nyala - when suddenly we saw a beautiful bull walking with several cows. They were in fairly thick vegetation which made the stalk and hunt that much more satisfying. We got within a 100yards of this amazing animal and Wayne made another great shot. What a beauty !! 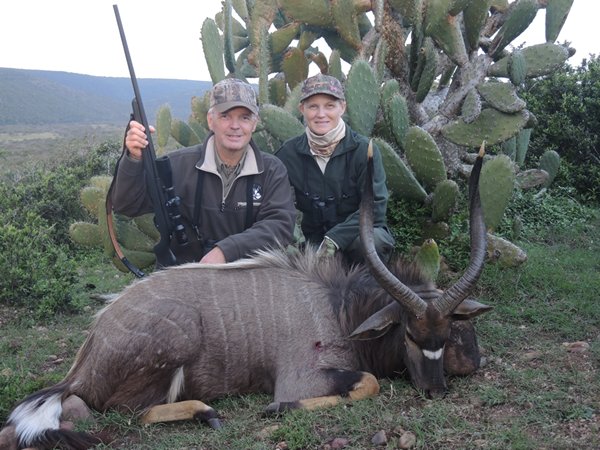 What a fantastic first day to start our safari.

Day 2 - Woke up to a beautiful misty morning. We started with kudu again. Once more only cows and young bulls. The grey ghost was living up to it's name - the old bulls hiding in the very thick mountainous vegetation. I sent Muntu our tracker to check in one valley while we scouted in another valley. A few minutes later he called me on the radio and told me to come quickly. There were 2 bushback rams feeding together - a quick glance though my binos and I put up the sticks immediately. Wayne took this excellent mature ram off the sticks at around 200yards. Brilliant shot !! 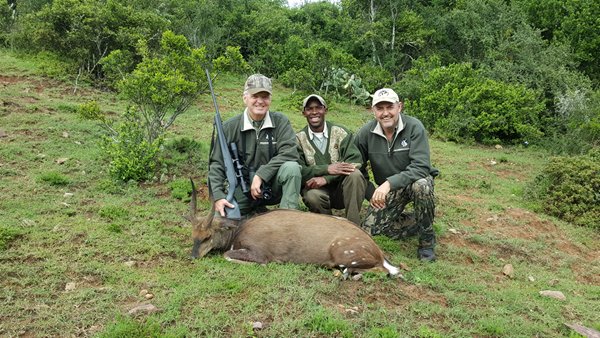 The afternoon was spent looking for kudu - but nothing. We were having fun, walking, glassing, seeing plenty of game.

The next day we left for another camp up in the mountains. A beautiful scenic trip and we arrived in time for lunch. We were keen to get out there looking for kudu - so we had a quick bite to eat and we loaded up. The afternoon we saw a lot of kudu - just not quite trophy quality.

Another kudu day and we were about to relax for lunch when some of the trackers shouted that there was a gemsbuck bull running straight down towards us. We had to be quick and Wayne was on the sticks and ready. An excellent snap shot and we had this great old bull. Lunch down by the river. The kudu were proving to be tough. We decided to give that a break and Sarah was eager to hunt something. We drove up into the mountain - there were springbuck and blesbuck available. Late afternoon and we were sneaking up a a big group of springbuck and blexbuck together. I explained to Sarah that we just needed to be a bit patient. Eventually this monster ram moved within distance and Sarah shot her first African animal at a distance of 229 yards. What a shot !!! 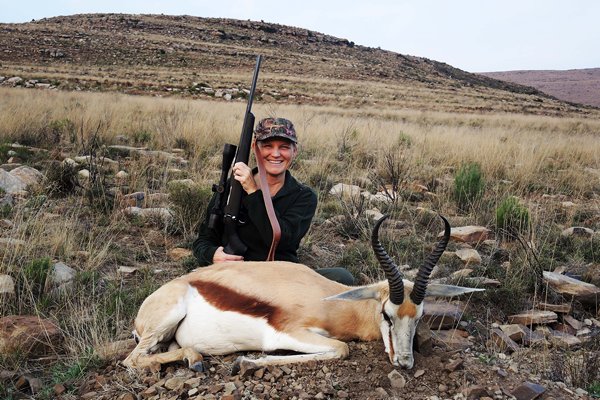 Sarah was over the moon - what a joy to see ! A magnificent trophy springbuck. Sarah was blooded in Africa. Early Tuesday morning we were back out after kudu. On arrival we spotted several kudu with a shooter in the pack - several of our strategies never worked and around midday we took a break for lunch to re-group. Luckily the weather was playing it's part and it had stayed fairly cool through out the day.

Soon after lunch we bumped a fairly large herd of kudu - around 12 cows and 6 bulls. In the groupd was 1 shooter. I grabbed the sticks and we ran down the steep hill to set up. We had to be quick and Wayne played his part. It wasn't difficult to pick out the bull and wayne made a superb shot over 350yards down into the valley.

We had this magnifent bull. 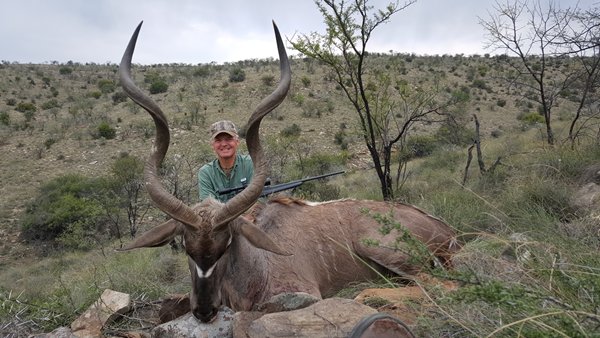 I could see the relief on Wayne's face - we had our kudu ! Time to barbecue. 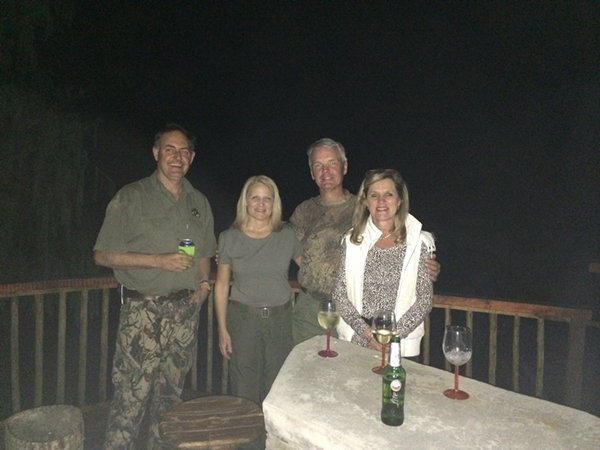 The following day in was Sarah's turn again - we were looking for an impala for her. Another stunning day out in the bush. Spotted buffalo and many other species while glassing and looking for impala. The afternoons seemed to be treating us better. We were on our way out to have a look at some blesbuck when we spotted a small group of impala. There was a nice ram in the group and we set off. Sarh was ready - we made another great stalk and were able to get within 50yards. Sarah shot the impala through the heart - the animal ran 30yards and dropped over. Sarah was again super excited - shooting well with that rifle "Lipstick & Lead" !!! Before leaving we were able to get some great pictures of these lions.

The morning we were leaving for our last stop in the Karoo - not before having a quick look at some of the bushman paintings ! We arrived in the Karoo around midday. We had a quick lunch and were out scouting for blesbuck. Whith large herds of springbuck warning everything it proved to be tricky getting close. Nothing hunted and another great afternoon - we bumped into this big old buffalo bull !!! The evening we spent sitting around the fire with a glass of wine. The last animal we were looking for was a blesbuck. We had some brilliant stalks getting right in amongst herds of springbuck and blesbuck - it was just finding the right one. Eventually late afternoon wayne took his final trophy and we had this beautiful old blesbuck ram. Driving through the scenic mountains. 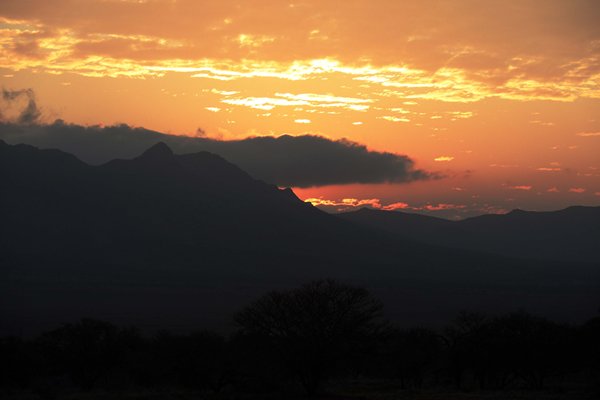 And the suns sets on another excellent African Safari.

Thank you Wayne and Sarah - till we meet again.