Scott returned to hunt with us in April 2016. Scott and his wife had visited us in 2014 - now Scott was back with a long wishlist. Great to see you again my friends !!!

Scott and his family started their trip down in Cape Town enjoying holiday time and everything this beautiful city has to offer. We picked Scott up in Port Elizabeth on the morning of the 7th of April and he was anxious to get going.... We headed out to Leopard Ridge where we were starting our safari. 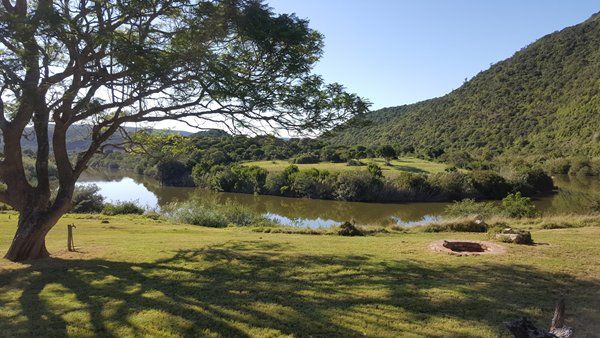 After unpacking and a quick sight in at the range we were geared up and ready to go for an afternoon hunt. A quick photo with what turned out to be our lucky hat ....... 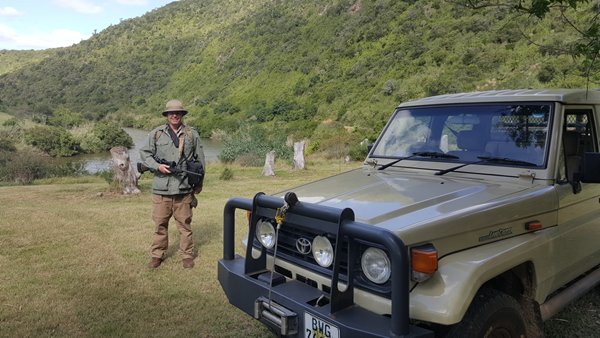 Scott had quite a long wishlist for the 7 and a half days we were going to hunt so I thought we'd start and take a drive with a "see what we see" attitude.... It's the beginning of the season and the ranch workers had been seeing a lot of animals about.

We drove to the top of the mountain to an open field where the plains game liked to graze in the afternoons. We parked and approached on foot into the wind to get a sneak onto the field without alerting any of the animals to our presence. As we peered into the field from the thick bush we saw a number of animals.... impala ram lying down, some black wildebeest bulls, a bontebok..... we slowly came out to push them off quitely. There was nothing we wanted in that group. As we slowly made our way along the tree line I spotted two bushbuck rams grazing much further down in the field. We decided to head back into the bush to try sneak closer....I could see the one was a monster !

Bending our backs and many spider webs later we were up closer. Sitting at the edge of the bush line we were waiting of a clear view and shot. The younger ram was coming towards us and almost getting too close. We sat patiently and at last the big ram gave us a clear shoulder. Scott fired and the ram took off and ran twenty yards into the bush and fell over. A perfect shot on this magnifecent bushbuck !!! 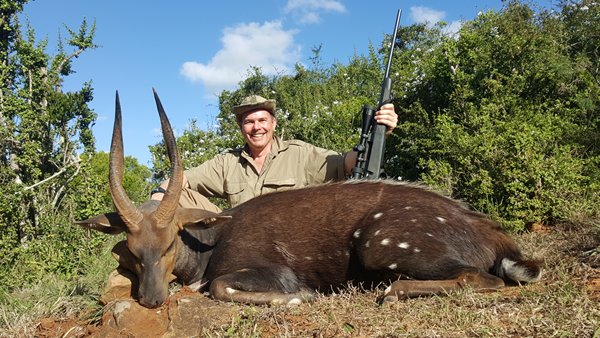 We took the photos, loaded up and dropped the bushbuck down at the skinning shed for Muntu to start caping. While he caped we did some more scouting - the weather was perfect and there were so many animals out. What a sight !!!

Muntu was done and we picked him up again to carry on hunting. We had spotted a hered of sable from the top of the mountain earlier and it looked like there was a big bull in the herd. We needed to get closer to have a look.

We stopped the vehicle in line with where we had seen the herd and set out on foot. Again using the wind and river bush we slowly got closer. We saw that it was a bachelor group of around eight to ten bulls....but there was one big bull - this was an opportunity and Scott was keen to take him. The bulls were milling around... spotted us and ran off. We made another approach. Two hours later the sticks were set up and the bull turned to give us a broadside shot. What a magnificent animal. 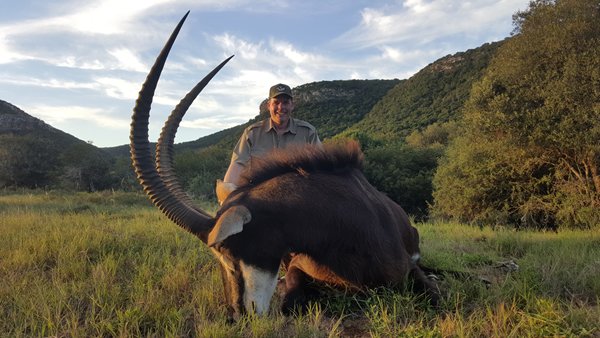 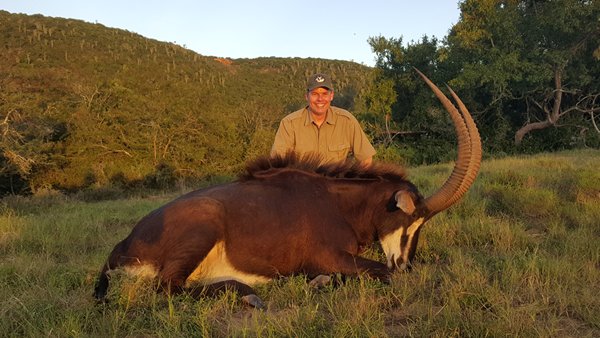 An excellent start to our safari. We ended the day with a couple of sundowners and a hearty meal. 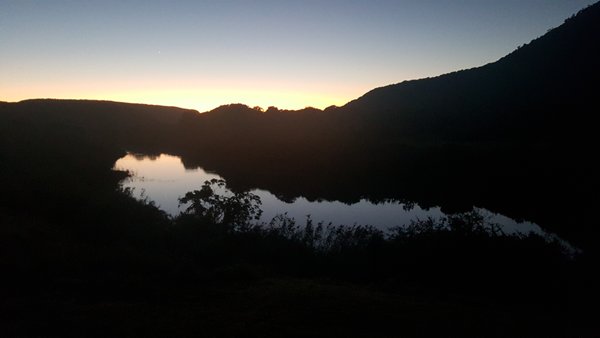 Day 2 An early start ......We were going after a kudu. This was Scott's priority animal - the grey ghost had given us the slip two years ago.

We started high up with a good view and sat for a while watching / glassing. A lot of animals but no kudu bulls. We moved to another area and spotted a couple of bulls. After making our way a bit closer....the bulls dissapeared into the thick bush. I decided to move around the back of the hill to see if we can catch them going down into the valley. We parked the truck and walked up slowly edging over the top of the hill. As we got closer I spotted a bull standing under a tree totally unaware of us. He was not fully mature and still had another year or two to go.... Scott whispered to me that there was another bull standing below this one. I glassed and immediately jumped for the sticks !!! This bull was huge - a 230 yard shot across the valley and we had this magnificent trophy. Well done Scott !! 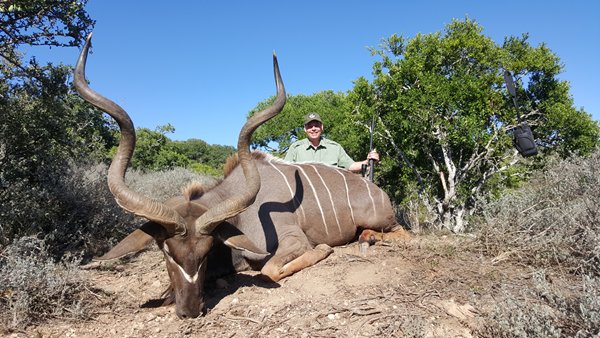 After a few hours spent getting the bull out of the bush we headed back for lunch - what a morning ! 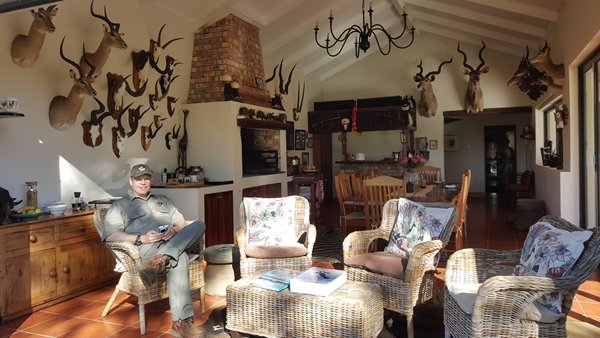 It was hot so after a cooling down rest we were back out and decided to go looking for a bontebok. We passed up a number of rams and eventually called it a day. The grey ghost was in the salt and a lot of pressure off.

Day 3 we started the day off after bontebok again - starting on the Northern side of the property, it wasn't long and we bumped into this old loner. The wind was in our favour and Scott made another good shot on this beautiful old ram. 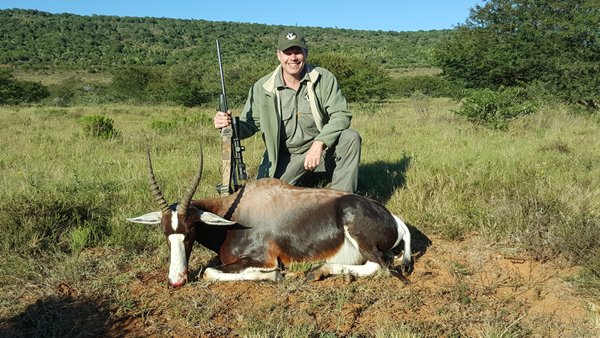 We offloaded the bontebok at the shed and then headed for Shamwari game reserve rehabilitation centre. Scott wanted to visit the rhino orphans from Sibuya game reserve. The vet at Shamwari is Dr Joubert and he kindly agreed to give us a tour of the centre. Fantastic to see the work these people do.... 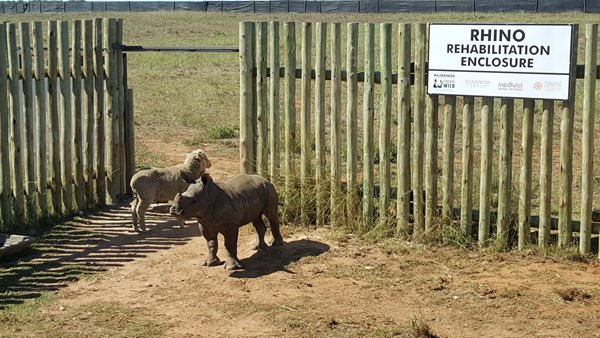 We left Shamwari with a lot of day still left. Scott had a score to settle with a red hartebeest and we went looking ..... The weather was extremely warm again - unusually hot and not much was moving. We spotted a young red hartebeest bull, plenty of bontebok, zebra and impala but no shooter.

We settled under a tree for some lunch and cooling down time. Late afternoon we were out again and we spotted a small herd grazing in amongst the trees. After a closer look I spotted a big bull lying in the grass. We could just make out his huge horns sticking above the vegetation. We set up a plan and it worked perfectly - this trophy will look great on your wall. 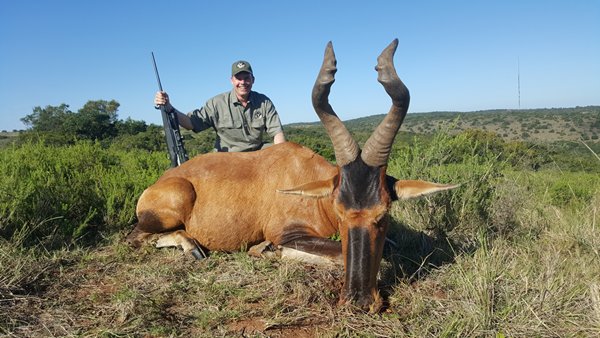 Another great day.... a few beers and some good rest.

Day 4 We packed up ....and after a delicious breakfast headed towards our Rhiebeek East camp. On the way we would be hunting springbuck. We got to Vaalkrans around 9am and immediately were out looking for a good trophy. We spent all morning out and the springbuck was proving to be tougher than we thought....it was hard hunting in the heat.

Late afternoon we were able to get onto this springbuck ram - well earned trophy. We had our springbuck and on our way to Rhiebeek East. We arrived early evening at our new lodge and unpacked....this is where we would be spending the rest of the hunt.

We were tired and after a excellent meal we were off to bed.

Day 5 We started the morning off looking for warthog, steenbuck, duiker and ...... the smaller critters were proving the most difficult. Late afternoon we decided to walk a ridge  hoping to see something...always the best way to get in amongst the animals. We were walking into the wind and it was not long and we came up on a grey duiker that was totally unaware of us. I slowly put up the sticks for Scott and down he went. 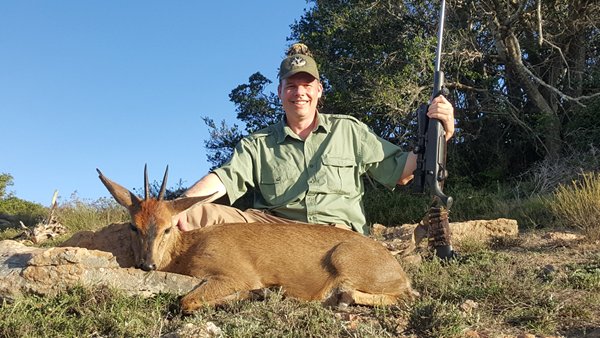 It was late afternoon now and perfect for mt reedbuck. We took a route home that would take us over the mountain - hoping to see some reedbuck. As the sun was setting we caught a glimpse of this big ram and that rounded off another good day. Day 6 We needed an early start. Driving to another concession to look for a gemsbuck. They prefer the dry areas - so we moved east inland. We arrived at our destination around 8am ready to go. We weren't hunting long and we spotted this magnificent lechwe bull - this was just too difficult for Scott to turn down. After a short stalk we had a fine trophy !! 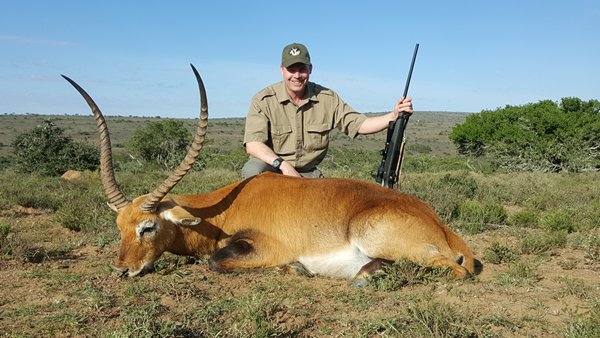 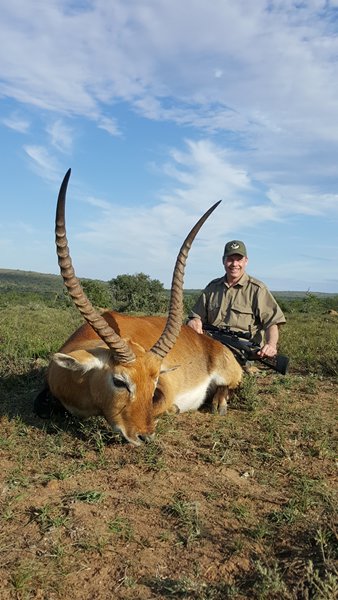 Muntu carried on skinning while we went in search of our gemsbuck.... We went after a small group of 3 but they gave us the slip. It was heating up again and we decided to rest and have lunch. We went looking down in the South side of the ranch and there we saw a small group and a bigger group on the hillside. They were in a difficult place so it took some time for us to get within distance. Eventually they settled and we were able to stalk and get close. I picked out a bull for Scott and he made another great shot shooting downhill. A beautiful old bull. 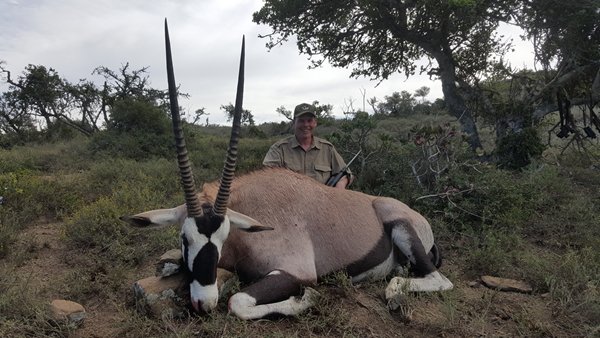 It was late afternoon and perfect timing. Muntu the skinner had one last one before we headed home. With all the trophies loaded we headed back to Rhiebeek East.

Day 7 We were still looking for a steenbuck, warthog and white blesbuck. We started the early morning going after steenbuck seeing very little and then a few walks looking for pigs. We had seen a lot of warthogs but not big shooters. We decided that sitting at a waterhole during the heat of the day will be an option.... 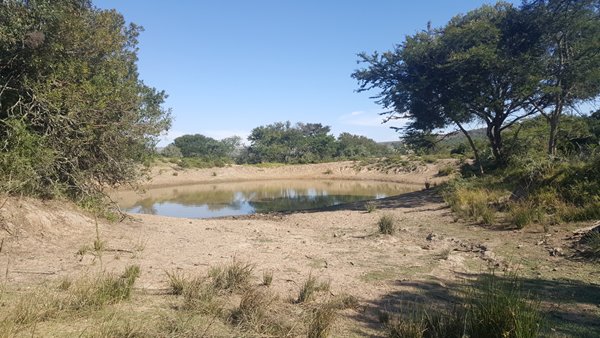 .....our spot for a few hours. A couple of young pigs and a big boar with no teeth ! A long but still great day in Africa.

Day 8 was reserved for a white blesbuck. We spent the morning going after several rams - unlucky on more than one occassion only to be bust by some other animals in close proximity. Last afternoon hunting, last light we got onto this white ram. Scott made a fantastic shot to end off a truly superb safari !!! 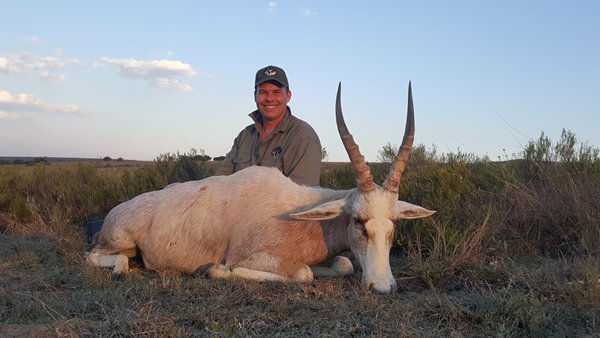 Scott - well done on your safari !! We hope you see you back again in the future.