Scott and his wife Karen hunted with Eastcape & Karoo Safaris in August 2014.

Scott and Karen are the winners of our annual hunt competition for 2014. After some long flying time from the USA they arrived in Port Elizabeth around midday day on the 26th August. We headed straight out and decided to sight the rifle in on the way down to the lodge. While setting up the targets - Scott spotted a black wildebees bull grazing on his own some distance from us. I had a quick glance with my binoculars and noticed it was an good quality bull.

Sighting in the rifle over the truck ! 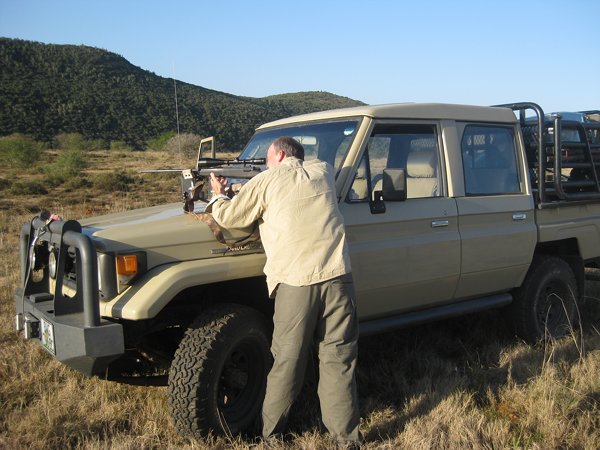 The rifle was dead on and Scott was eager to get going.

The wind was perfect and we approached behind a treeline. The bull was on his own which made things a lot easier. I hung back and Scott approached the last 10m on his own and was able to take the shot. The bull fell in his tracks. A really good trophy !! 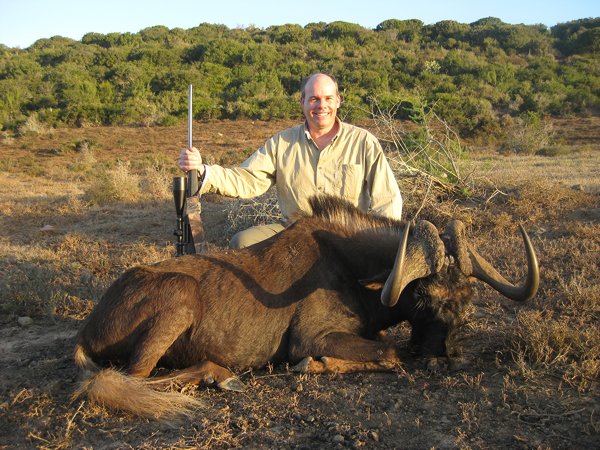 We dropped the animal at the skinning shed and made our way towards the lodge. A good start to the safari - we settled in to our rooms and took an early dinner to get some early sleep.

Day 1 - After early bird breakfast we were out looking for kudu. We spotted plenty of kudu cows, but no bulls. While searching we saw three impala rams together - one was a nice trophy and we decided try. There was plenty of cover and we were able to get within 100yards - Scott made a great shot and the impala went down. 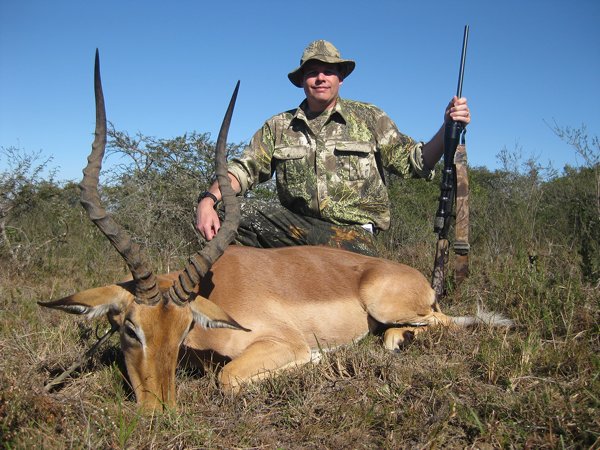 The rest of the afternoon we spent going after a huge red hartebees. He gave us the slip and we spent more time glassing for kudu. No bulls out there !!!

Day 2 â€“ There was a lot of talk about bad weather coming. Up early and after kudu first thing. A lot of animals out there - we saw several kudu cows but no bulls. After 11am we started looking for other animals - clocking up some miles on foot we were able to get really close in to some animals. Each time the male would move or there wasn't a shooter in the group. By mid afternoon the wind had picked up really bad with some rain coming in. Late afternoon the weather had become extremely unpleasant - it was difficult to look through binoculars never mind trying to shoot !!! A very hard days hunting. Luck was not on our side.

A tiring drive back to the lodge - empty handed. As always we were still able to enjoy some good food and wine at the lodge. 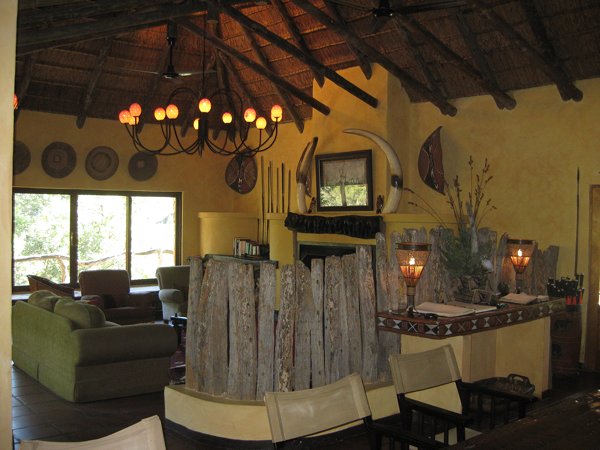 Day 3 - We awoke to the sound of rain on our thatch - it was raining steadily and there was no point in rushing out. We enjoyed a late cooked breakfast - the weather was easing a little and we decided to go back to the area where we had seen the huge red hartebees. I thought we could scout for him while looking for kudu at the same time. On the way it was raining on and off. We got to the concession area and there was even a bit of hail and sleet thrown at us to make our day really fun.

We couldn't find the red hartebees but we spotted some kudu bulls and tried a sneak on them - they were not in an easy place to get to - some bontebok warned them and they were gone. The afternoon we went after blue wildebees. There were three big bulls together - all three shooters. They were grazing in a good spot to approach. We did a sneak into the valley and came up below them - we were really close and some bontebok again snorted at us. The bull picked his head up on high alert - Scott needed to make the shot. We heard the thud and the bull made off. After several hours tracking - the blue was still on the move. We had to finish up with the sun down. Try again in the morning. 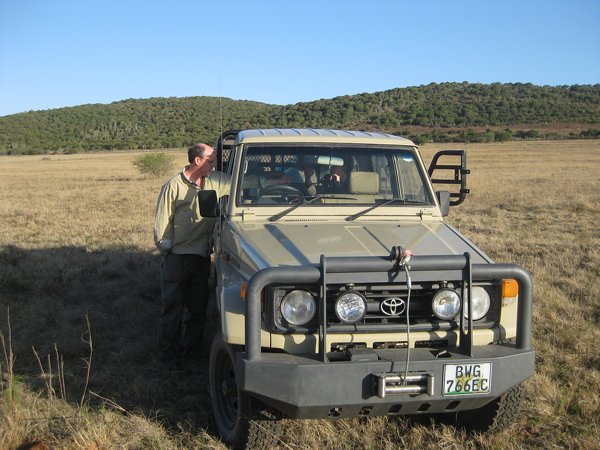 Day 4 - Back to look for the blue. It had rained during the night so most of the tracks were washed away. This made it very difficult. We looked for a few hours and decided to call it a day with hunting time running out. We had a look for the elusive red hartebees again - there was a reason why he was so big !!!

After lunch we tried another concession that had blesbuck. Not long in we bumped into a good nyala bull - Scott was tempted, but he was not quite trophy size. We drove around some and then saw a fairly large herd of blesbuck. We approached into the wind behind some thorn trees and were able to get within 150yards. Scott made a good shot behind the shoulder. We took the photos, loaded up and headed for the lodge. 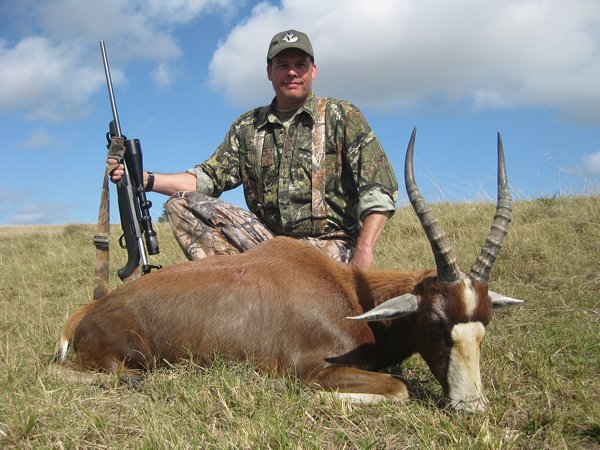 Day 5 - Scott was supposed to finish after four days but was able to change his flight. We headed out towards one of our concessions which has plenty kudu - the weather had not been kind to us. This was our last chance. When we arrived - half an hour into glassing, we saw a good kudu bull standing in the sun. We set out on foot and in the end just got too close and he spotted us before we located him.

The rest of the day we combed this big property and only saw plenty cows, calves and young bulls. I didn't want to send Scott home with anything less than a good trophy. At the end of a long day and tough safari - the kudu had escaped us. 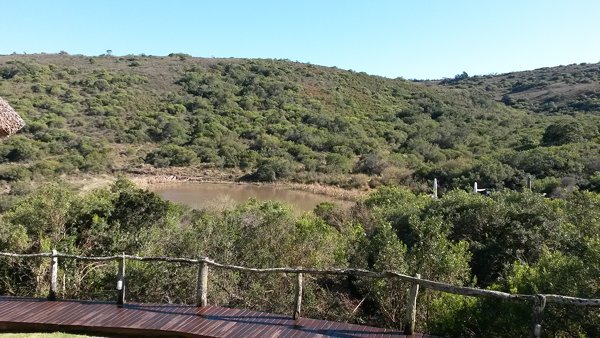 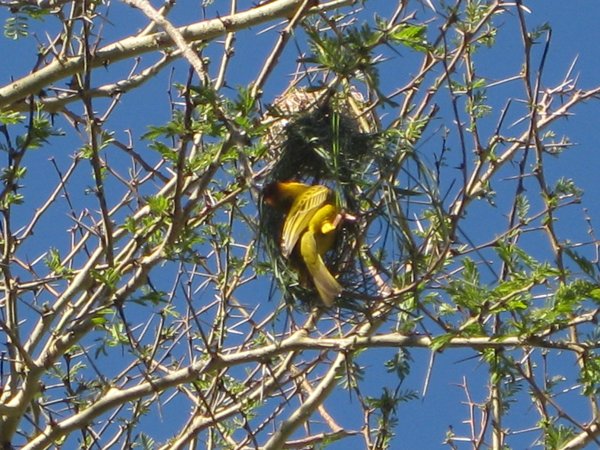 While we hunted, Karen was kept busy with photgraphic game drives, a visit to the elephant sanctuary as well as some scenic drives to the local coastal holiday village / resorts close by. 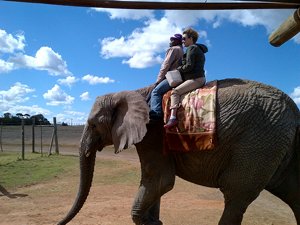 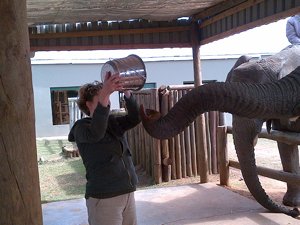 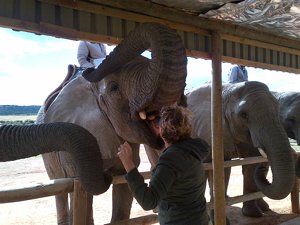 Till we meet again my friends !! We hope to see you again.