Rich and Tyler caught the late flight into Port Elizabeth. We were there to greet them on arrival and after a smooth exit out the airport we were on our way out to the lodge. Arrived at the lodge around 7pm - after unpacking our things we sat down to a scrumptious meal. The boys were tired so nice early night was in order. After drawing up a quick plan for the following day - we retired to bed.

Day 1 - A quick sighting in of the rifles just to check if all was in order. We started off looking for blesbuck and impala. Plenty of animals about - the day was a scorcher running into the late 30's. By 10.30am a very excited Tyler had shot his first animal in Africa. After all the photos were done, we got the animal to the skinning shed as quickly as possible.

Rifles sighted in - ready to go 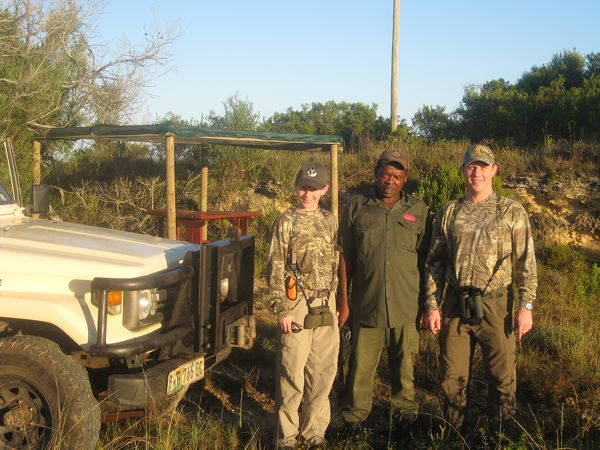 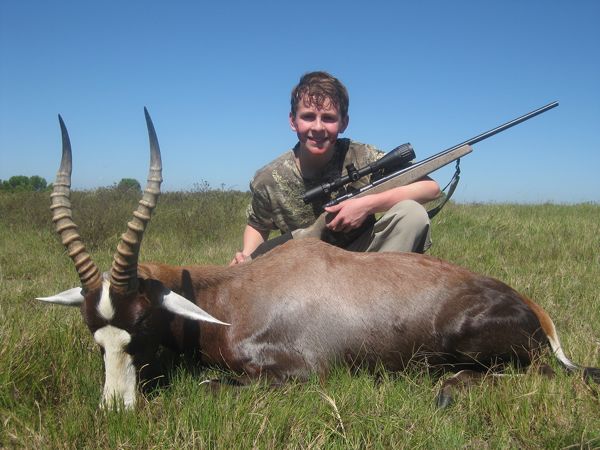 The afternoon we headed out to one of our other concession areas. The day was so hot - animals started moving very late making hunting pretty difficult. We tried an impala or two, but they gave us the slip.

Day 2 - Our day started early again. On our way to pick our tracker up we bumped into herds of impala and blue wildebees as well as a lone Red Hartebees bull. Rich decided he wanted to take the Red Hartebees - he was a good bull and Rich dropped him at 275yards. A great shot. 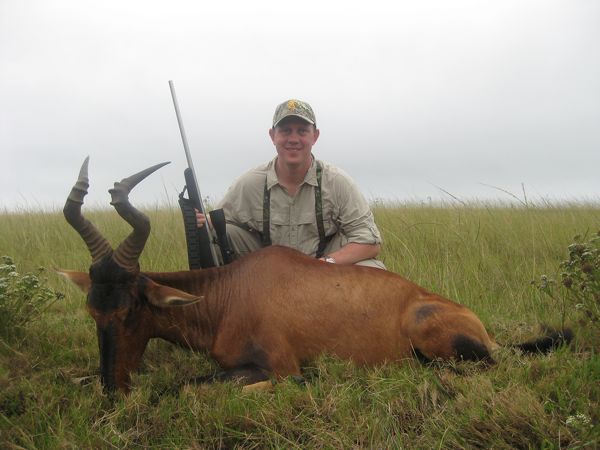 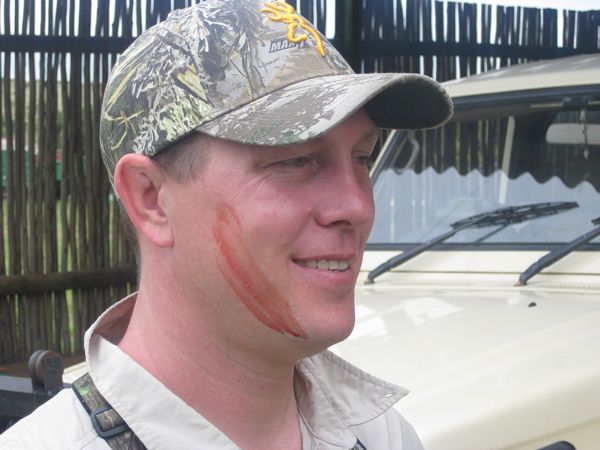 After skinning the red hartebees there was still plenty of the morning hunt left. The wind was starting to pick up and we decided to look in the valleys where the animals would be looking for shelter. Luck on our side we peered into a really deep valley and spotted a small group of waterbuck. Amongst them was 1 big bull. We had a perfect viewpoint and Rich set up on the sticks and made a great shot. He rolled a few metres down the very steep incline before coming to a stop. Then the work started.

Check how steep this is ! 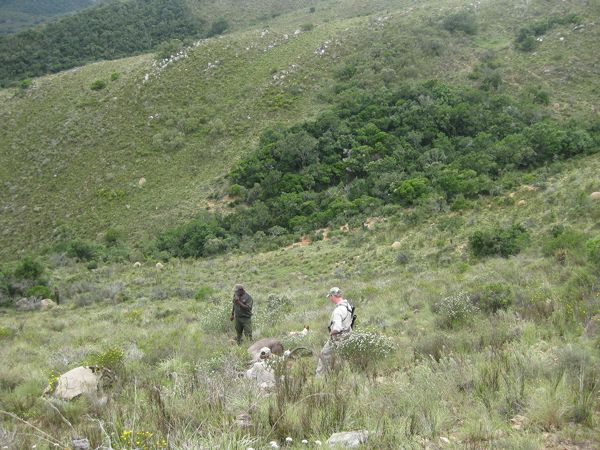 Rich with his awesome waterbuck trophy. 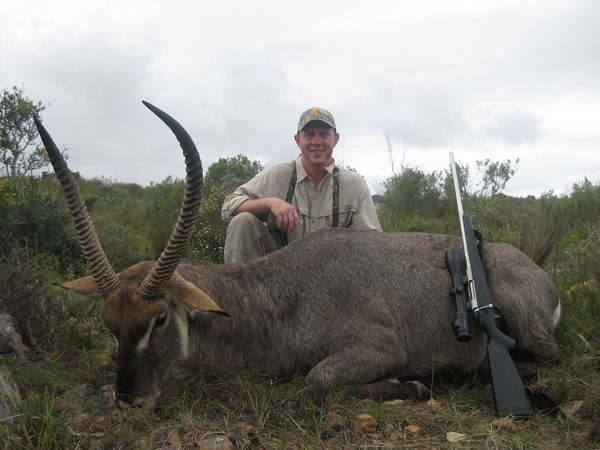 Day 3 - Another early start, up at 4.30 am going after kudu and impala. Weather has been a bit cooler with a lot more wind - making kudu hunting a bit tricky. We spotted a few bulls but nothing big enough. Late morning we spotted this old impala and Tyler made an excellent shot.

Tyler with his impala 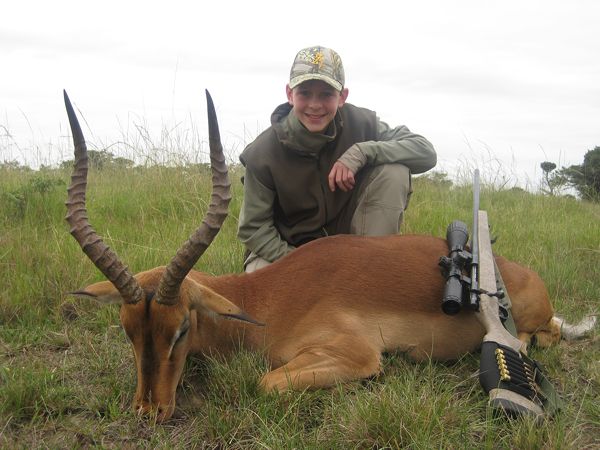 The afternoon we spent going after Blue Wildebees. Tyler soon found out that these big hardy animals aren't as easy as they look. It was getting late and we decided to save the blue for another day. Rich still had a blesbuck to get so we decided to try one on the way home. Last minute stalk and Rich made another fine shot and bagged this good blesbuck. Day 4 - Got up nice an early again this morning (4.30am). This is hard work hunting kudu this time of the season !!!! We headed off to our kudu concession situated in the heart of the real kudu area of Africa. We decided to spend the night in the luxury tented camp to give us more hunting time. The morning we arrived around 7.am. We were off to a good start - as we were checking in at reception - we spotted a big kudu bull. We set off after him but it was getting a little late already and he gave us the slip. As we followed him we bumped into another good bull and tyler had a long shot but missed this tough opportunity. We spent the rest of the morning chasing the elusive Gemsbuck. We ended up goung for lunch empty handed. We were under pressure.

The afternoon our luck changed - we spotted a gemsbuck bull from camp. Sunning himself against the hillside - we tried to plan a tough approach in some thick bushveld. Our first approach spooked him as we got just a little too close. As we walked down the valley he came up in front of us in a clearing. There was no way closer and Rich was forced to take a 325yard shot. The gemsbuck fell in is tracks - much excitement alround. Great shot Rich ! 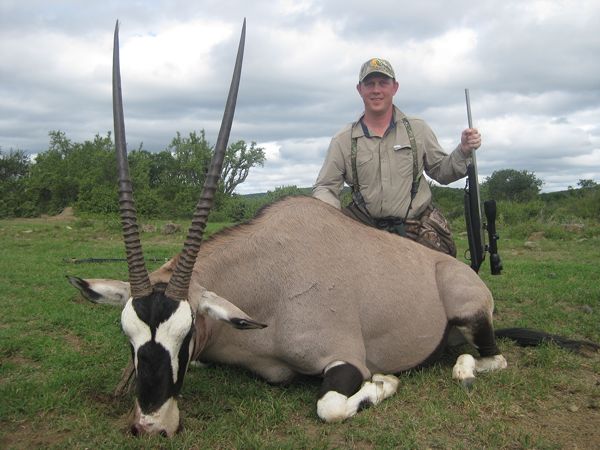 After all the photo formalities we headed out to look for a kudu for Tyler. I suggested we find a few good spots to sit and glass. The afternoon was still young and we had time to kill before kudu hour. The wind was blowing so we checked in the small deep valleys that were providing shelter. A lot of cows but no bulls early afternoon. Around 5pm we spotted a good bull feeding fairly high up a valley slope. We made a long stalk through some very thick valley bush, trying to avoid another bull on the way. Tyle made a 275yard shot and the result was this fine bull.

Tyler's kudu - getting this brute out of here was another story !! 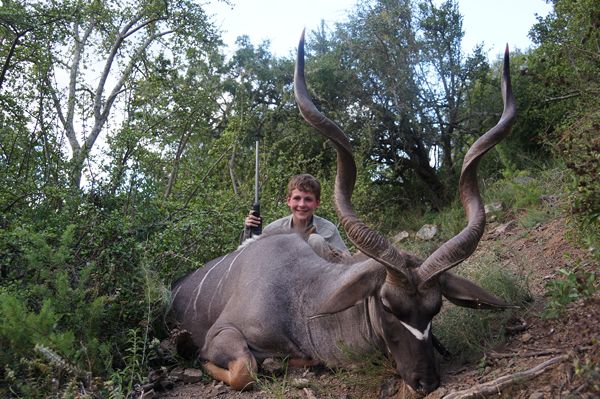 We got back to camp late - what a day. Two very difficult animals in one afternoon. We had an awesome time.

Day 5 - Not too early ! Around 6.30am we headed out looking for warthogs. One of our other clients was hunting on the same property and had spotted two good boars. We headed over to that area and sat there patiently. After around 45 minutes I caught the glimpse of a warthog and we started the stalk. eventually we were surrounded by impala and could move no more. We waited a while longer. The next thing this boar stepped out and Tyler was quick onto the sticks. We decided to head back to base camp. It was still early and enough time to catch a nap back home. Very hot again today so no point in going out before 3pm. Rich was going after a big blue. We found small bachelor group and and Rich dropped this incredible bull. Day 6 - Was a tough day ! Spent a lot of time walking and soaking up the beautiful scenery. We didn't get anything - no more said.

Day 7 - We went in search of an upgrade impala. The morning yielded nothing bigger. After lunch we headed back to our favourite impala concession and had a few opportunities. Some got away and eventually late evening Tyler bagged the beauty. A great end to a wonderful safari - Rich and Tyler only intended on taking 5 trophies and ended up hunting 10 trophies. Now to find the space back home !!

Rich and Ty with the bag for the 7 days. "Amazing experience. I had very high expectations going to South Africa with my son.  Ashley, Harry and staff exceeded them all.  Not only was the lodge, food and service amazing but so was the hunting."
"I was concerned before my arrival with having enough time to hunt 5 trophy quality animals in 7 days of hunting, especially since we were after a trophy Kudu and Gemsbok. Not only did Ashley put us on trophy quality animals but amazingly put us on 10 trophies in 7 days."
"I couldn't ask for anything more out of Eastcape and Karoo Safaris. From day 1 they were very responsive, set up the exact hunting package my 12 yr old son and I were looking for and hand walked me through the entire experience of getting everything set up to travel from the U.S. to SA. Thank you for everything and we will be back next year."