Justo and Maria joined Eastcape & Karoo Safaris on the 5th of August for special safari. Justo and Maria are from Spain and were celebrating their 35th wedding anniversary. No better way to celebrate than a hunting safari in Africa !

Justo and Maria arrived at the Bloemfontein airport and I was there to meet them and shuttle to our Karoo Lodge. We got out to the lodge around lunch time. Unpacked .... sighted in .... and out we went. 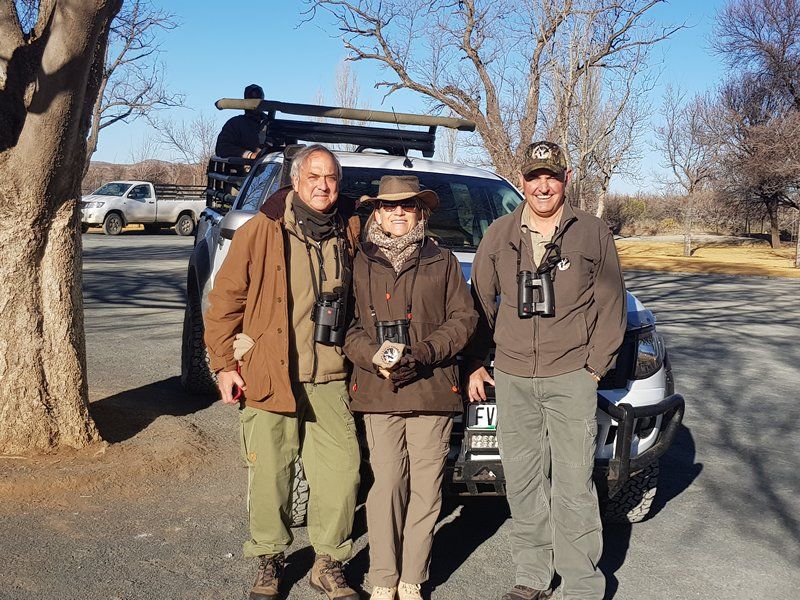 We were only a few kilometres from the lodge when we spotted a herd of 15 lechwe bulls. Quite a magnificent sight .... all mature and we could pick and choose. So many animals in a group always makes the stalk so much more difficult. We stopped the vehicle and used a small dry creek as cover to get closer. Eventually we ran out of cover and Justo was forced to make a 240yard shot and did so perfectly. Great trophy ! 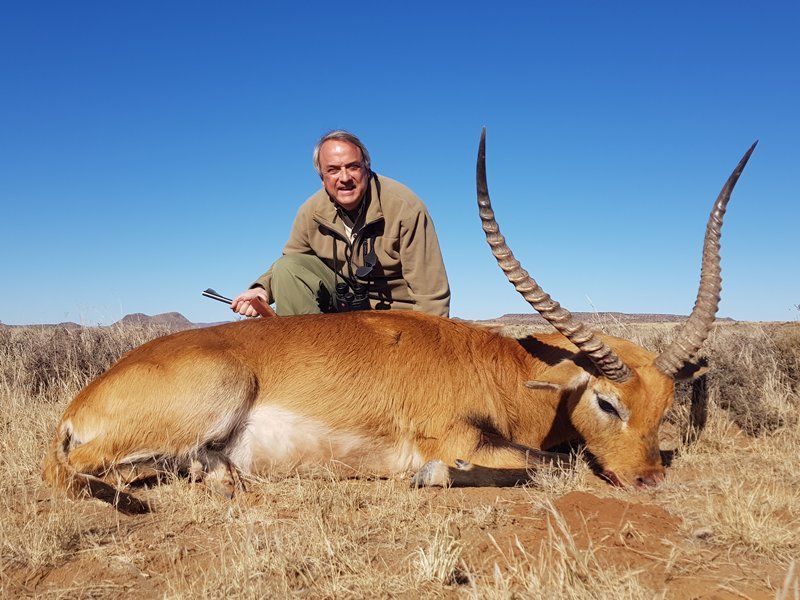 At the start of the hunt Justo told me that all warthogs are a green light ...... so we were continually scouting. Any warthog that we saw and to be assessed for teeth ! This was to be the first boar we took down. 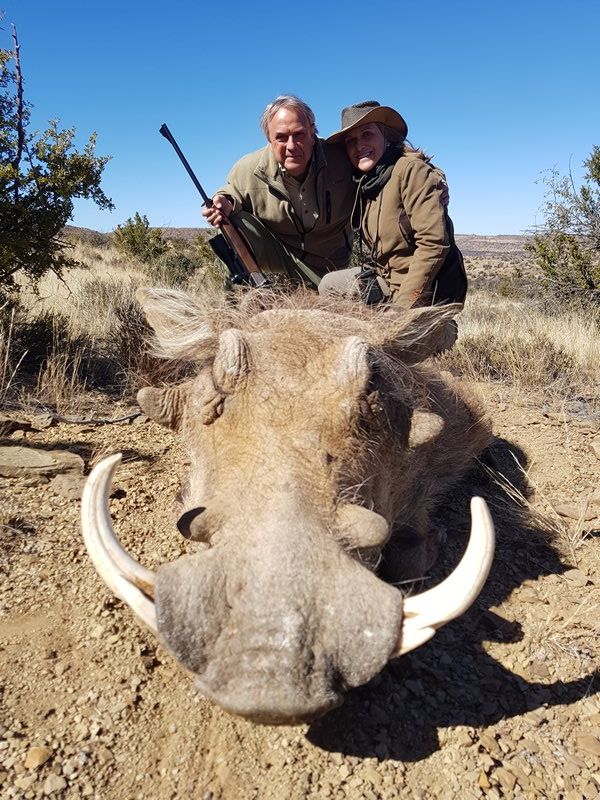 Enjoying our lunch in the sun ! 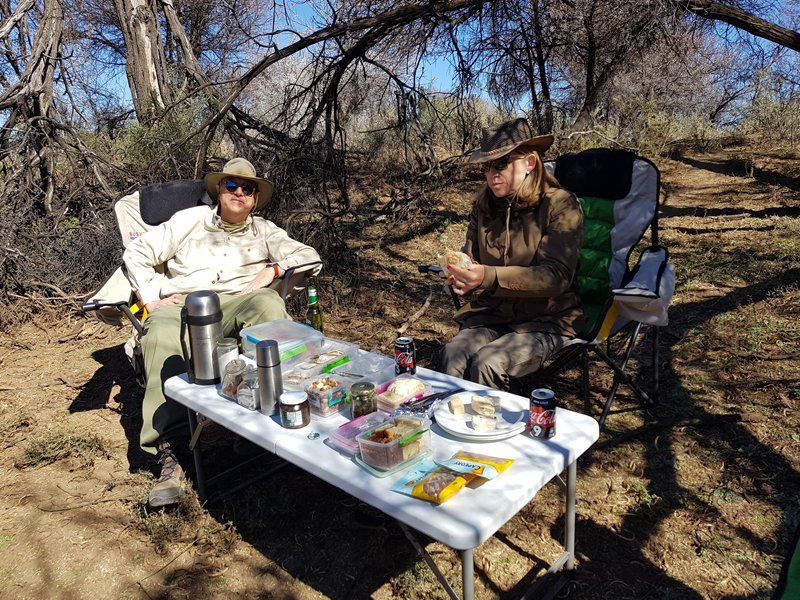 Warthog number 2 tried to make his getaway. The terrain was wide open with little cover and we followed the pig who eventually went into some low bush cover to hide which gave us a chance to catch up. We approached slowly and I told Justo to be ready. We moved in and spotted the warthog hiding and we were able to take the shot before he ran. 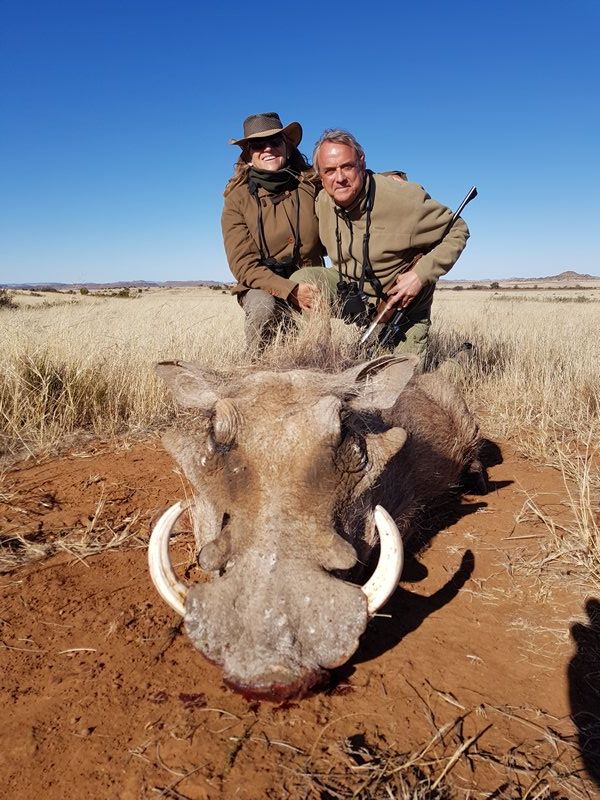 Early morning and we were out looking for buffalo. We spotted this magnificent waterbuck bull sunning himself. Justo made a great shot and took down this awesome trophy. 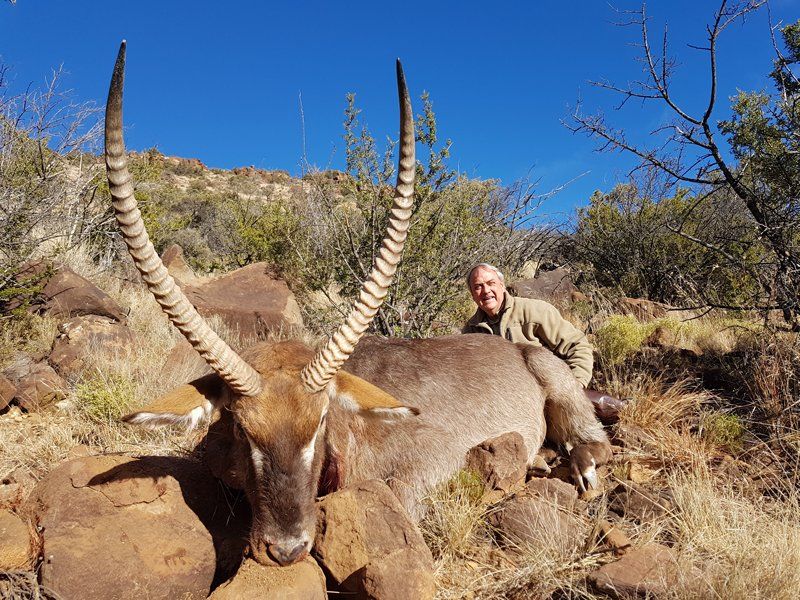 We loaded up the waterbuck and has hardly gone over the next hill when this old boar ran across the road in front of us. Maria decided that she wanted to have a go. We grabbed the sticks and gave chase - and got a little closer ...... The pig was aware that we were after it. It kept stopping and looking back. I got the stick ready for Maria and informed her to take the shot next time it stops. Maria timed it perfectly and the pig went down. That was no 3 ..... good going ! 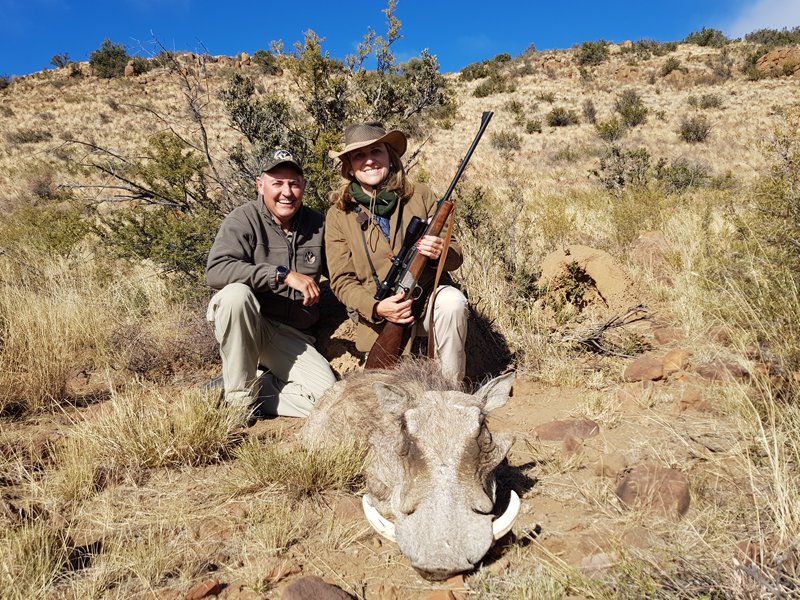 We were still trying to get to the area where we had seen some buff bulls in the past few days. The waterbuck and the warthog had slowed us down a little. There was a familiar tap on the roof of there vehicle and the tracker called me onto the back. Under the trees a few hundred yards away were 2 mature buffalo bulls. One was standing and the other bigger one lying down. After having a good look at both bulls from all angles we decided to go after the bigger of the two.

We drove downwind to get below the buffalo and had some good cover to work our way up through the trees. Walking slowly and quietly we moved closer. As we got closer I could see the big bull was still lying and the standing off to the right. We were crawling on our hads and knees and by the time we had got really close in we were 35yards from the bull. Still on my knees and moved to put the sticks up for Justo and the bull must of heard something and jumped up and gave us that stare ! I told Justo to get onto the sticks and be ready ...... the buff turned to run and Justo fired and hit the buff perfectly. He ran 50 yards and went down and gave the familiar bellow. 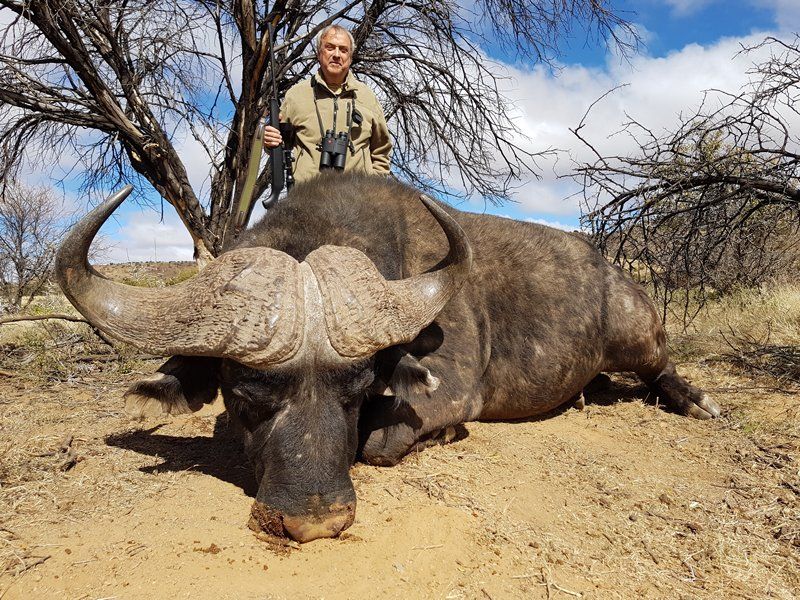 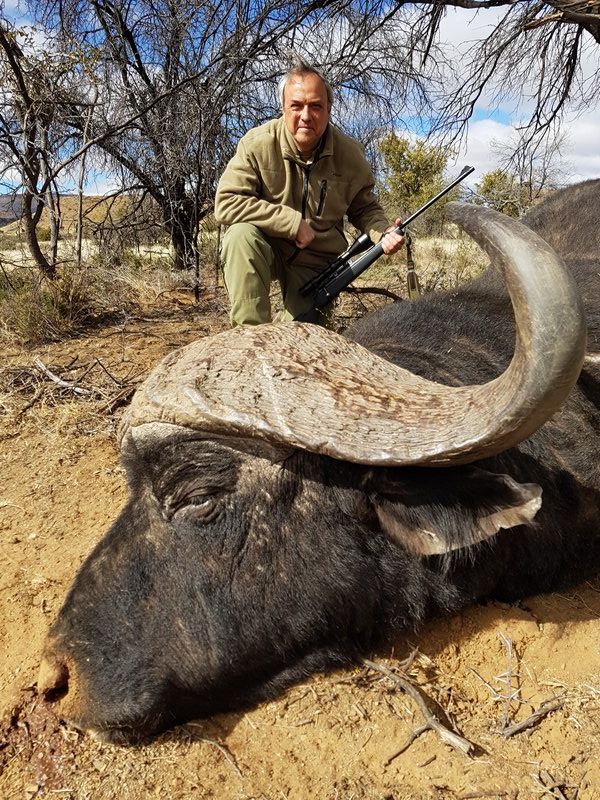 We did all the photos - got the buffalo loaded and were soon on the road again. The great thing about hunting this magnificent 50000 hectare property is that you never know what you going to bump into around the next corner. We stopped on top of a koppie and glassed the magnifect views. Some 950 yards away we spotted a group of 7 eland bulls. They weren't in a great place to stalk and I suggested we have lunch and see what happens. During lunch they moved and we now had a better opportunity.

Justo lining the shot up ! 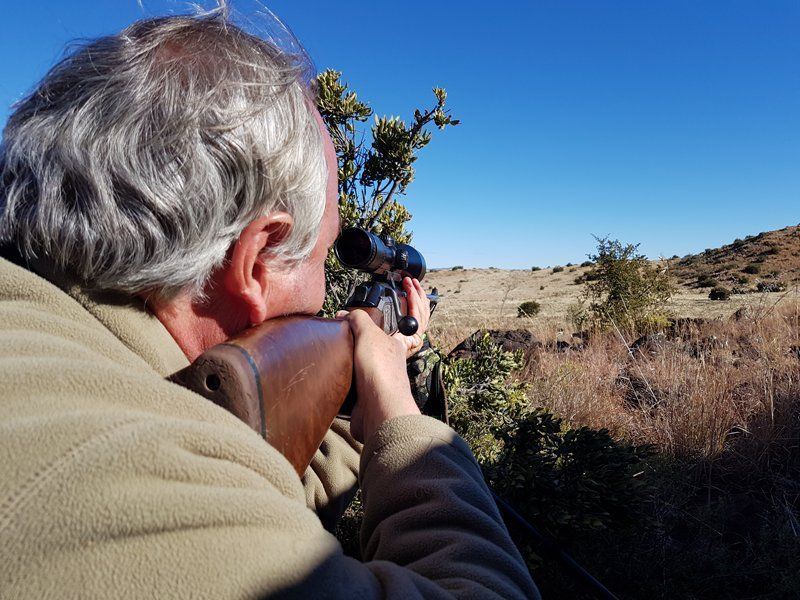 Dinner after a long hard day Jackals are plentiful and when this guy stepped out Justo was quick to get onto the sticks and take him ! 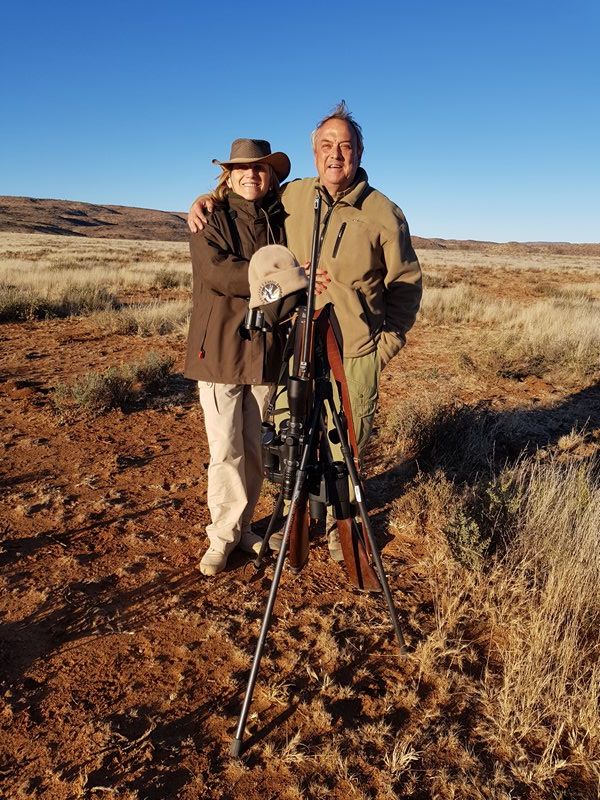 After passing up several blue wildebees bulls we say this blue going over a hill looking very relaxed and having not seen us. We made a good stalk to get to withing 200 yards to take this monster. Walking quitely up to one of my favourite spots for all species of animals we were lucky to get warthog no4. Justo looking very happy with this one! 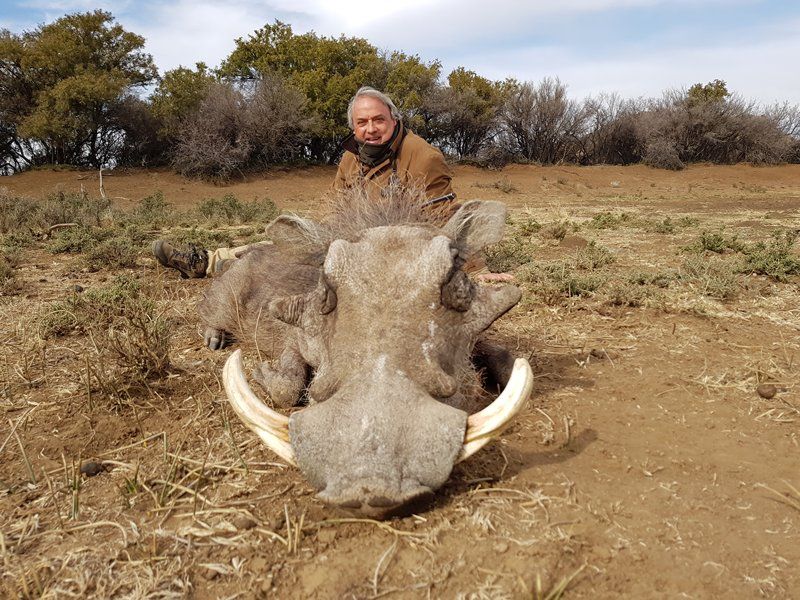 This day belonged to the black wildebees. We spent most of the day going after them. With little cover in the terrain they like it was tough going. Eventually we got this very nice bull - a great shot standing off the sticks 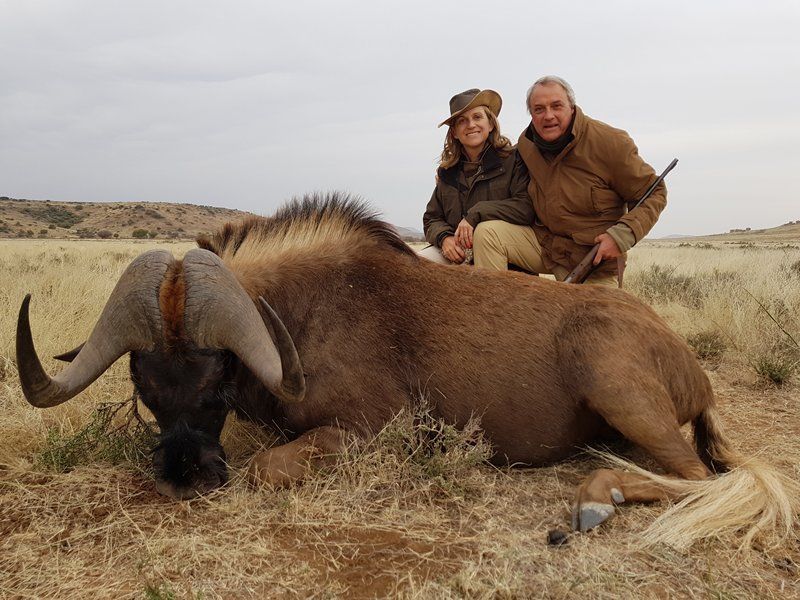 We were tired and had been walking all day. It was late afternoon and this lone ram stepped out infront of us. Warthog no5 - what a week we were having ! 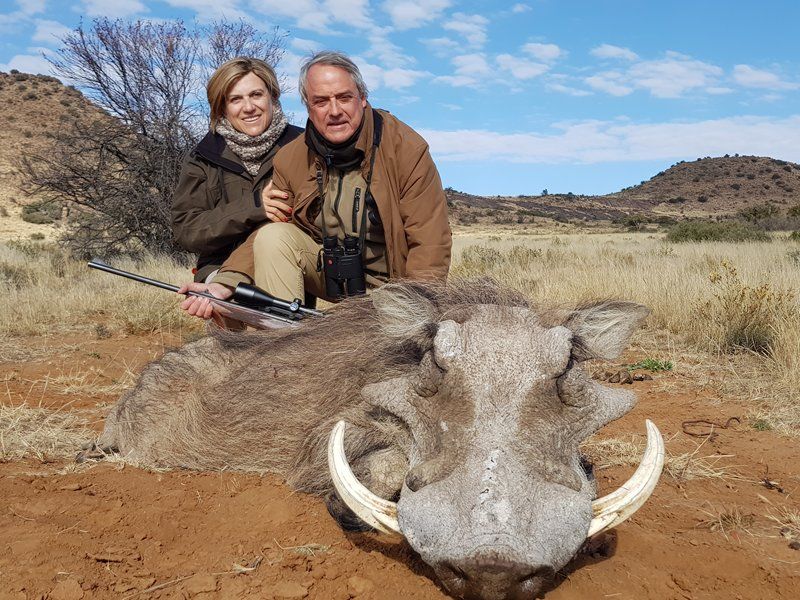 Justo and Maria - thank you for hunting with Eastcape and Karoo safaris. We got some awesome trophies and lots of fun together.