John and Michelle spent a week in Cape Town on holiday before joining us on Safari in the Eastern Cape. Wanting to spend some time in the bush hunting, doing some photographics and seeing the big 5 - they called on us. We picked John and Michelle up at the airport Sunday morning around 12.30pm giving us enough time to sight rifles in and a quick hunt. The aftrnoon was awesome weather with plenty of animals about, but none of the trophies we were looking for.

Sighting the rifle in. 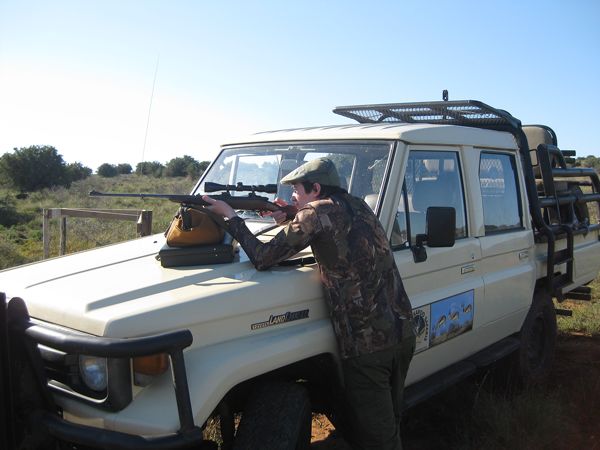 We then headed to the stunning Kwandwe Big 5 reserve we will will be staying for the duration of our hunt. On the way down to the lodge we bumped into some lions - with 2 of the rival pride male lions eyeing each other, this made for a lot of excitement.

Down at the lodge we enjoyed a stunning 3 course meal and off to bed to be ready for our first hunting day.

Day 1 - We started off looking for kudu. We hunted some hard terrain only seeing a few young bulls. Weather was getting warm midday and we decided to head to another area in search of warthog and bushbuck. Myself and John headed to an area and I sent my tracker David to look in another valley. We got to our spot and it wasn't long before and big warthog stepped out. We unfortunately didn't get him - and soon after that David had spotted bushbuck. We walked to the top of a cliff and looked down into some thick bush and sat down to wait where David had last seen the big ram move. An hour later we spotted the ram moving very slowly through the trees and John made a fantastic shot on him.

What a beatiful ram. 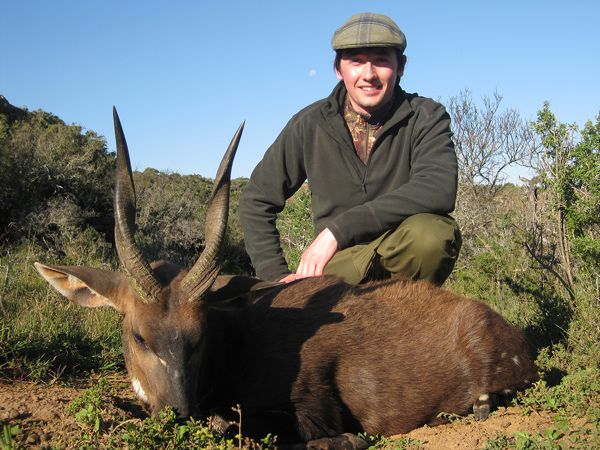 We took the ram in to be skinned and myself and John decided to try look for a kudu bull we had seen earlier. The wind was difficult but we moved around the valley and after a long walk and at last light John made another excellent shot on an old massive kudu bull. Great shot John. 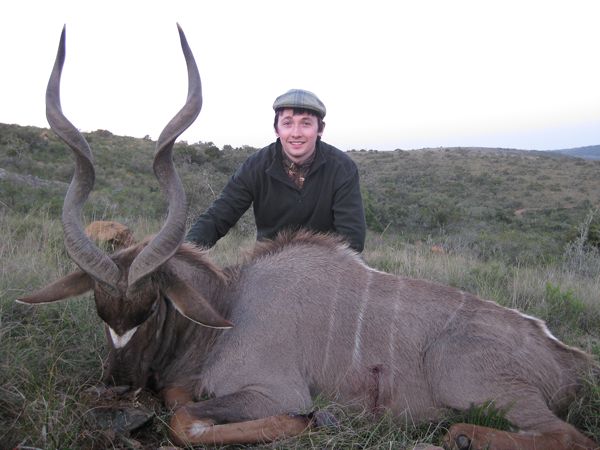 What a fantastic first day out.

Day 2 - With another day of superb weather, we spent the day hunting a trophy warthog. We had shots at two shooters and missed both. The end of the day we decided to check the rifle again. The rifle was shooting way off. A very frustrating day for us. All in all, still an enjoyable days hunt. We saw in excess of 30 warthogs during the day. We did have some excitement when John fired at the second pig and a large buffalo bull broke from the bush above us !

Day 3 - John and Michelle decided to spend the day on game drives taking photographs. From all accounts they had an awesome day seeing elephant, lion, buffalo, rhino, kudu, zebra, cheetah and much more. Very lucky !!! Another great weather day.

Day 4 - With a different rifle we headed back to look for either a pig or a blesbuck. We were out early and the morning was bitterly cold. The warthogs were slow to get up and when they did - they lay in the sun making spotting very difficult. Around 10am the pigs were starting to move - but still no big boars. We spotted a monster lone blesbuck ram lying on is own and we made a perfect stalk on him and took him at 130yards. A perfect shot. 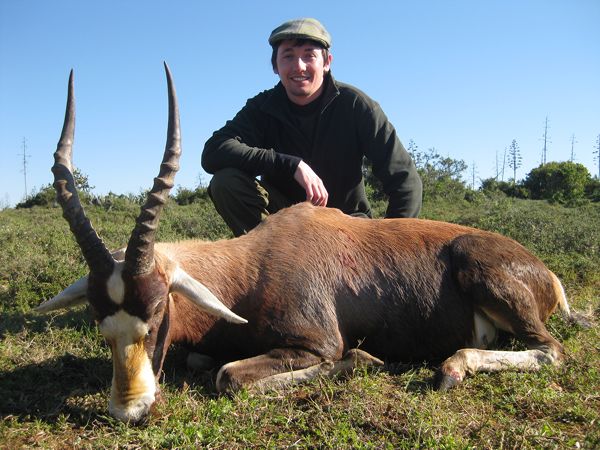 Then it was off to the airport for John and Michelle to head back to Cape Town for a few more days of holiday.