Ian joined Eastcape & Karoo Safaris in June 2021 for a memorable safari. If there was ever a true saying of, ‘arriving as clients, and leaving as friends’ then this was one of those safaris! What incredible banter, hunting and storytelling. The days just flew by, way too quickly, and this was an indication of us all having a jolly good time! 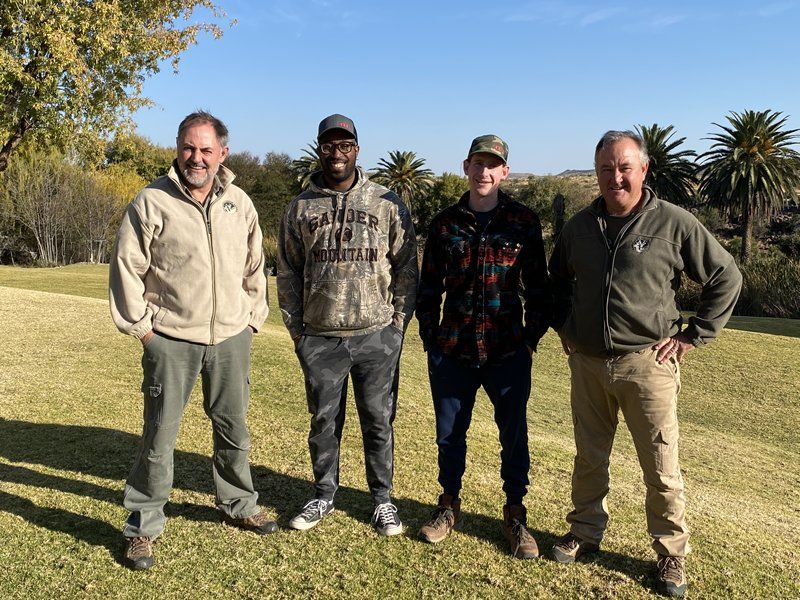 We arrived at camp late afternoon with a little bit of time to do the sighting in. Ian was spot on and we were all excited to get going the next day. Long flights and very tired it was early to bed !

First morning out and we were scouting with a fairly open wish list. We were not out long and we spotted this warthog sunning himself. Quick ... quick were the words out and Ian did a fantastic job to take down this old boar ! 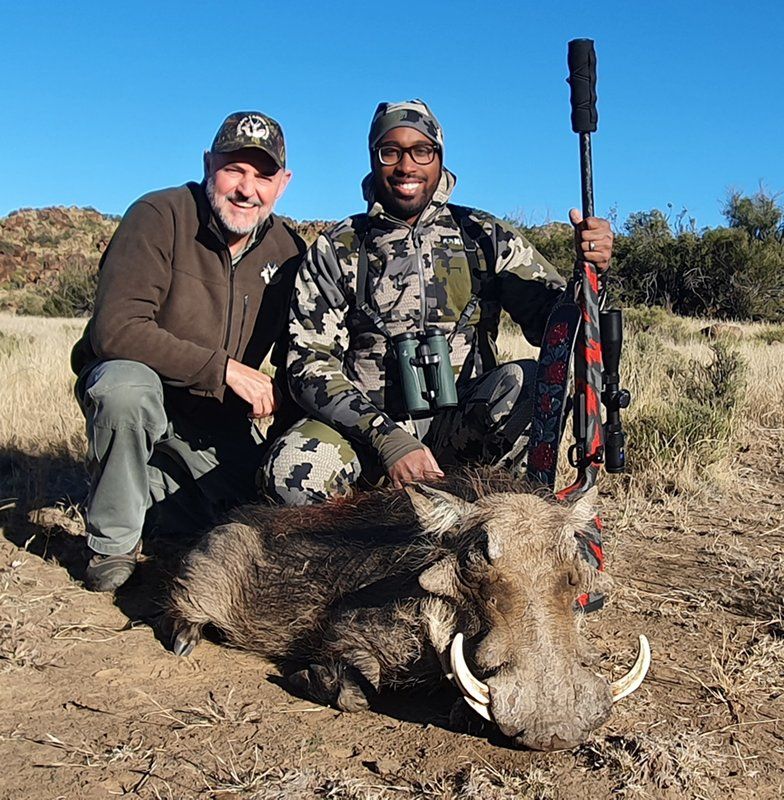 Kudu was high priority on the list, so we were glassing all the valleys all the time. Passing up quite a few "nearly there" bulls, we bumped in to this very old figure eight bull. Ian made another crack shot ! 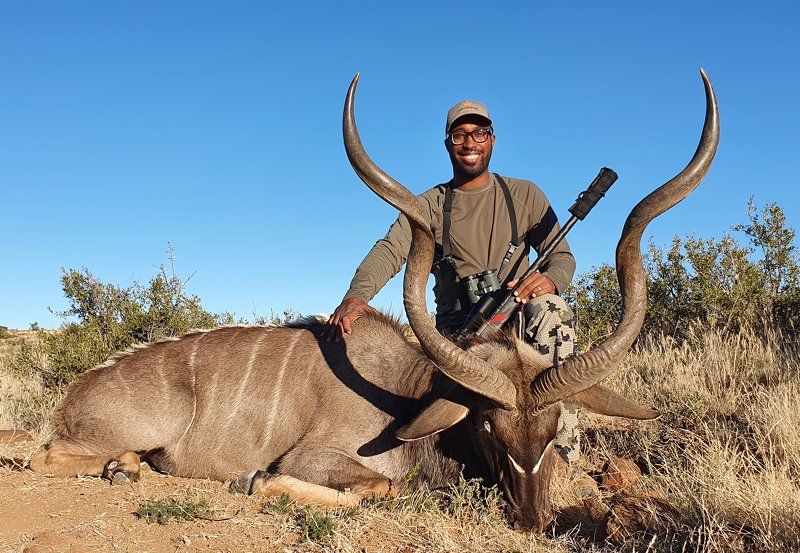 A great trophy to hang on the wall. Ian was very happy and the pressure was off !

After many photos the kudu was loaded up by our efficient team who took it back to camp to be skinned and salted. Just like that we were back out hunting again. After lunch we spotted a herd of springuck, all were rams and I noticed some very well represented ones in the group.

We had been after them for an hour or two when they finally settled in a basin amongst the koppies. We approached until we ran out of cover - I indicated to Ian that this was the closest we were going to get. We had a good set up and Ian dropped the ram in his tracks with one of the longest shots he ever made.

Comfortable lunch at the lodge and we were ready to head out again ... not before saying hello to the lodge warthog first ...

The afternoon we were after blue wildebees. We were struglling to get close to any. Everything was very spooky in the wind. On our way back to the lodge we spotted a lone bull. We approached cautiously - he reamined inquisitive enough for us to get a shot.

The next day we planned a long trip to the West side of this 115 000 acre property.

Packed lunch and supplies, we were focusing on Hartmans Zebra. They are wary animals and extremely difficult to approach. Eventually we spotted a herd of around 8-10 .. we planned our approach and descended the mountain. With little cover the last 200 yards was intense and we were on our hands and knees most of the time. At last getting this shot on a big stallion ! 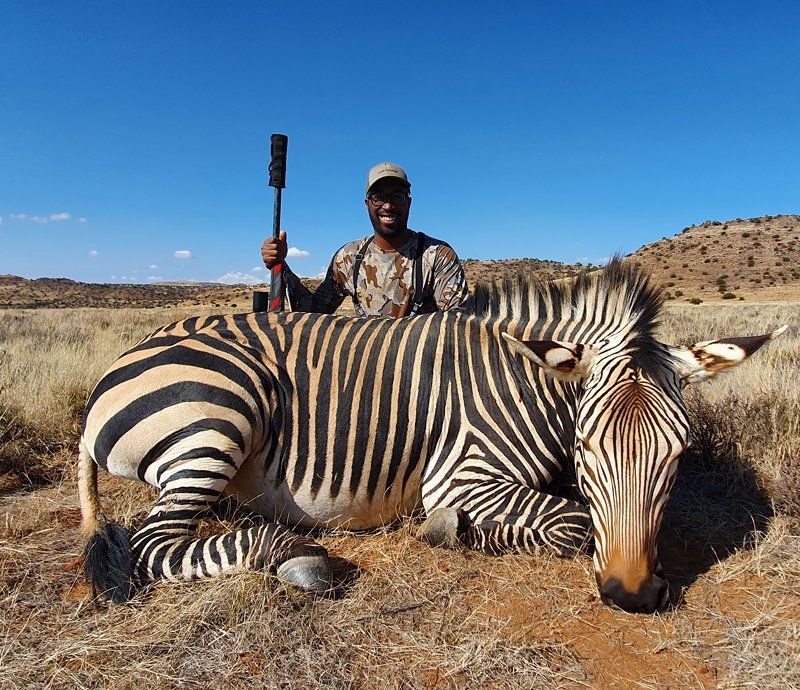 These zebra are truly magnificent animals !

Then time for well earned picnic lunch .... and just a little bit of shut eye. 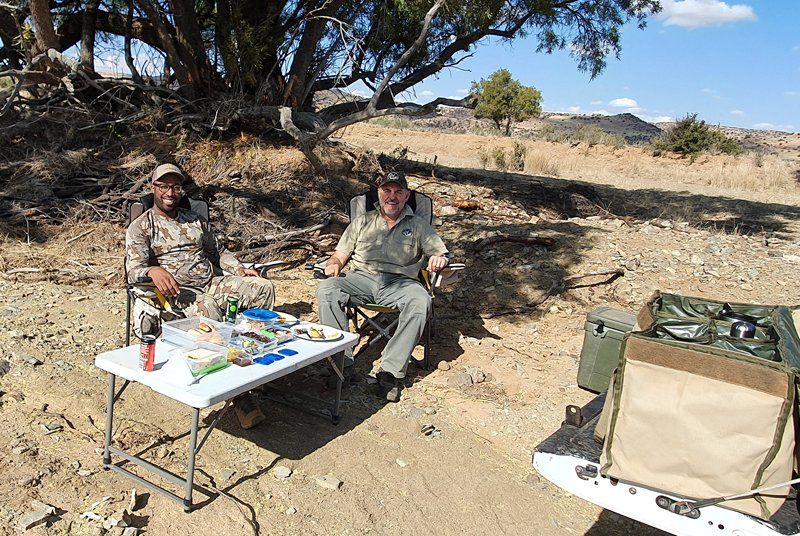 Soon we were ready to move .. I spotted a big blesbuck ram in the distance from our lunch spot. Another long walk in store for us. There were two rams together and in such a great spot we started our approach leaving the vehicle exactly where we had lunch.

By the time we got close and peaked over the koppie we were 120 yards from the big ram. Ian made another fine shot on this big ram ! 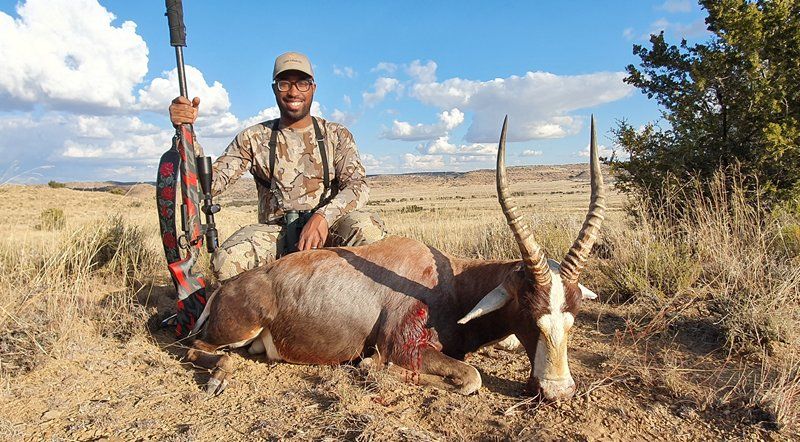 We moved camp up the the Northern lodge - on route through the property we saw a very good trophy copper springbuck. Ian was keen so we got to a plan and went after him ...

Incredible copper springbuck and Ians attention turned to getting the springbuck slam ... with only a few days left.

I told him we could do it !

Great day for a lunch on the deck !

The white springbuck were all the way on the Southern side of the property - so we decided to try there first thing in the morning and if we got that out the way then try a black springbuck in the afternoon ...

No mistakes on this pure white ram. Good going Ian.

Making my life easy as a PH !

Last afternoon and we only had the Black springbuck left for the Slam. It was going to be tight. 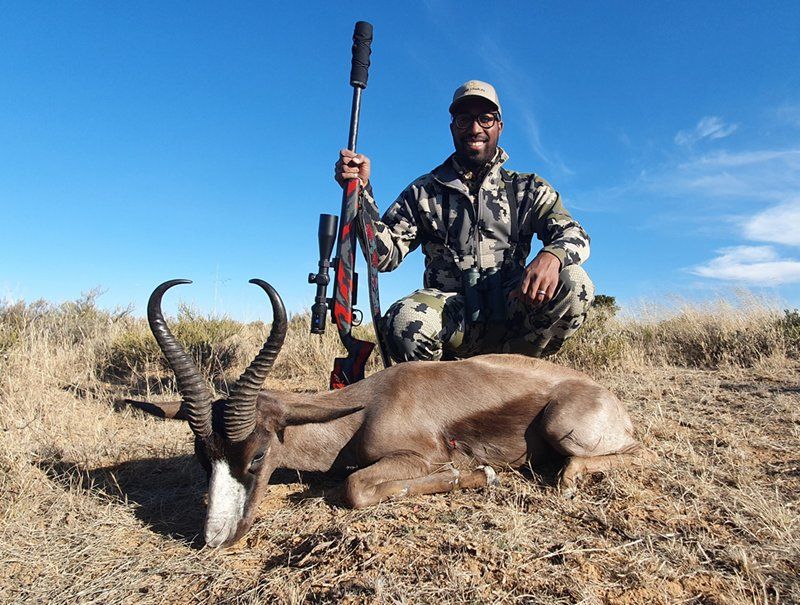 After passing up one or two smaller rams we eventually got this big ram down. Well done on a very high quality Springbuck slam. Not many places you can take all four on one property. Great shooting !

We still had time to celebrate with a sundowner down at the lake ! 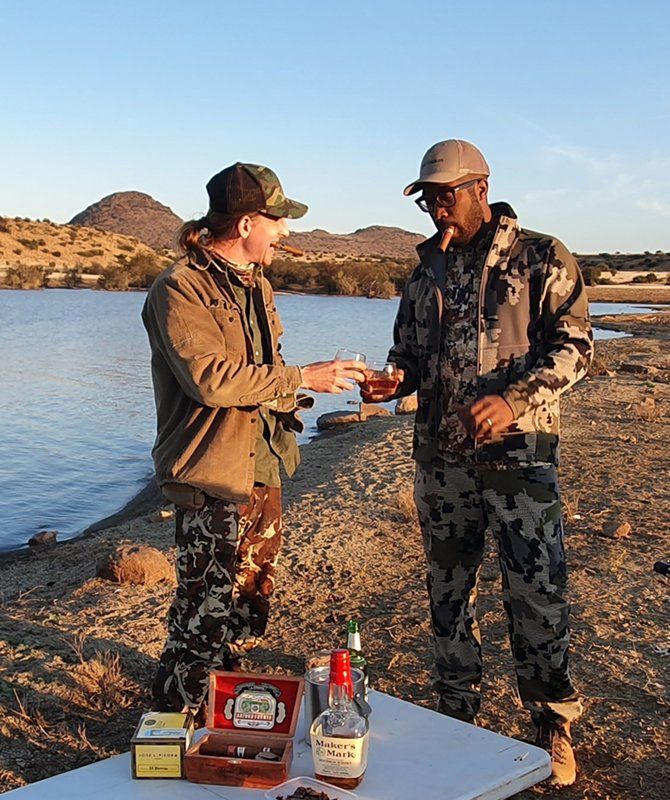 What a hunt. We had such great fun and hope we see you guys again. A truly memorable safari !