Alex and his wife Katy hunted with Eastcape & Karoo safaris in June 2014.

Alex and Katy were in South Africa for a wedding and decided to add a hunting safari onto their trip over. I met them at their hotel venue early Sunday morning on the 29th of June. We packed up and left for the lodge. We sighted the rifle in before driving down to lodge. Once at the lodge we had a quick bite to eat â€“ Alex and Katy were eager to get out for an afternoon hunt.

Day 1 - It was a long haul up the mountain to get to the open plains where the blesbuck and wildebees hang out.

Not long into our drive we spotted a small herd blesbuck â€“ out first attempt we got busted and we moved on. A little while later we spotted a bachelor herd with ideal cover for stalking. A good sneaky approach and Alex put down his first African animal. A great blesbuck trophy â€“ well done !! 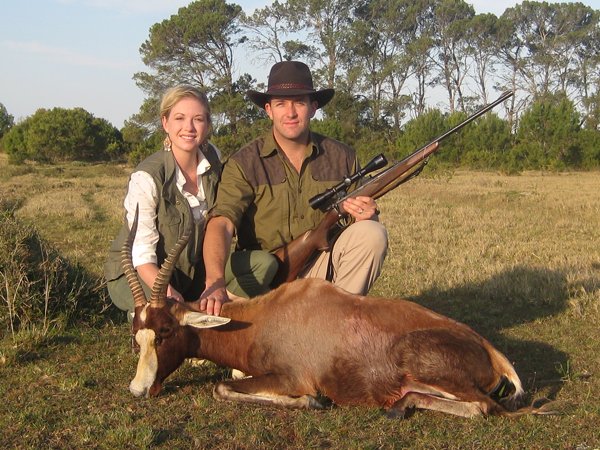 The rest of the afternoon we spent going after blue wildebeest. After some bad luck we headed home to have some much sought after rest.

Day 2 â€“ We were up early and driving to one of our close by concessions. What a view on the way up â€“ with the morning mist settling in the valley. 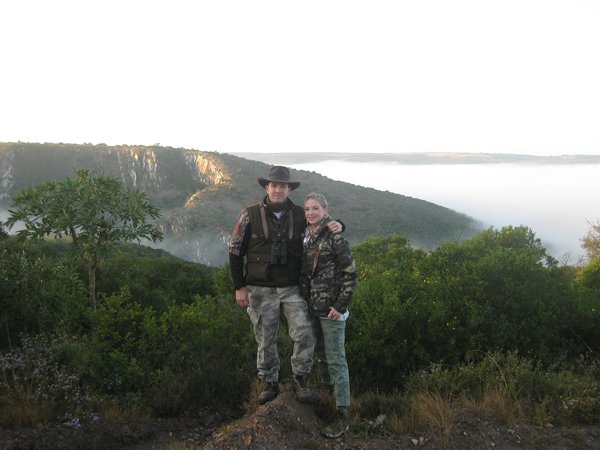 Alex was keen on a zebra â€“ we saw a small group feeding in the bottom of the valley, an ideal spot for a stalk. Working our way down the valley we were eventually able to take a 200 yard shot on this beautiful stallion. The winch proved to be very useful and once we had loaded up we headed back to camp for lunch. 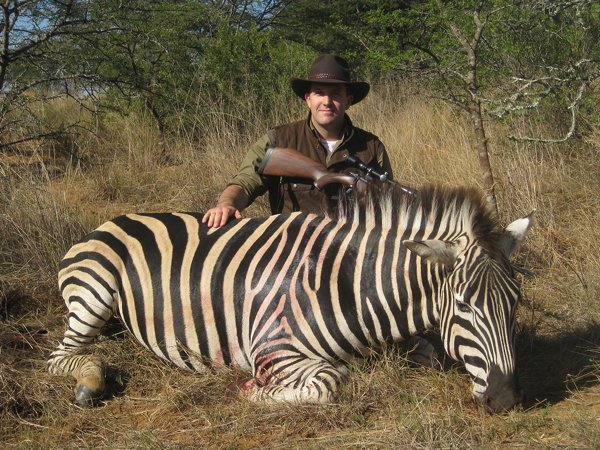 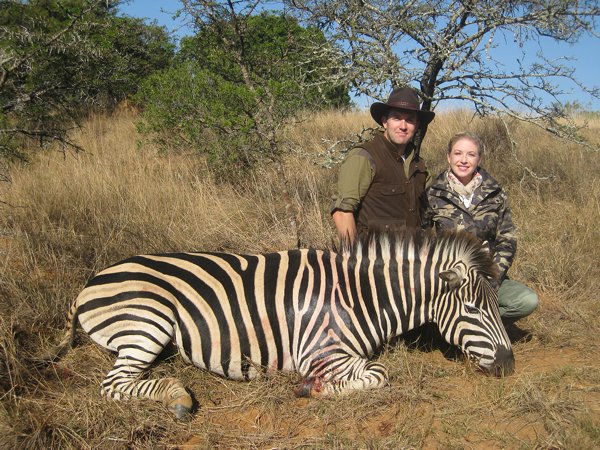 Mondi our tracker worked his magic during lunch and we were back out hunting soon enough. We headed out to leopard Ridge to look for a black wildebeest. We spotted a bachelor herd of five bulls and were able to make a good shot on this magnificent bull. A good day. 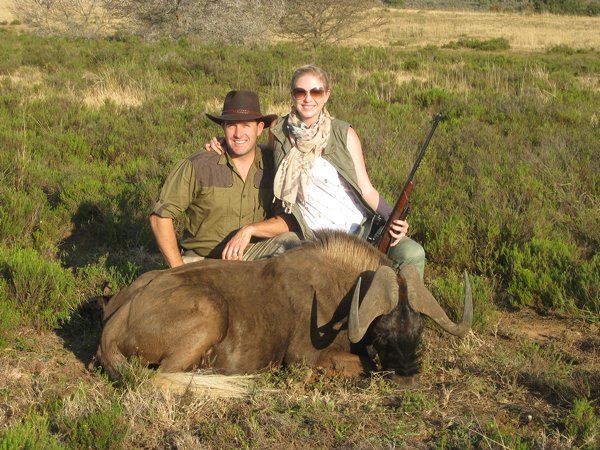 Day 3 â€“ Katy wanted to do a photographic game drive so we opted to hunt at one of our concessions close to a big 5 game reserve. While we hunt â€“ Katy would  be guided to take pictures and we made plans to meet up for lunch.

We werenâ€™t looking for any particular animal â€“ the first we went after was a group of impala. But there wasnâ€™t anything of size in the group. We had spotted a nyala in the area earlier so we chose to work our way up the valley slowly and to see if we could see him again. It wasnâ€™t long before we saw a dark body moving slowly in the thicket. The bull hadnâ€™t seen us â€“ so we were in a good spot. We were very patient and at last, after more than an hour and a half this beautiful bull showed himself and Alex took him down with one shot. 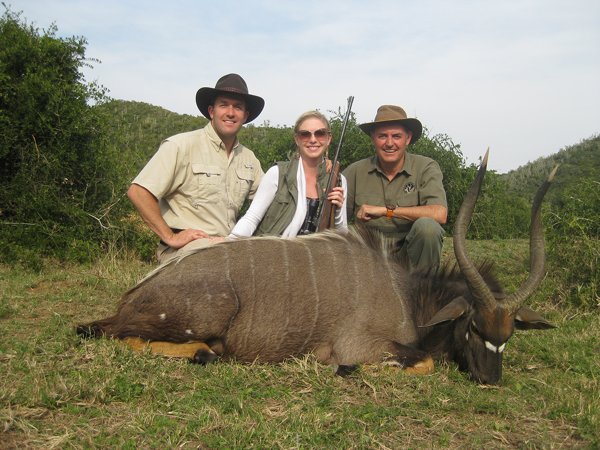 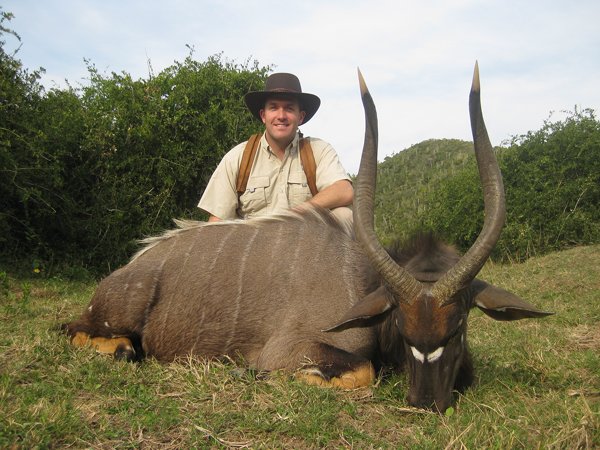 We had loaded the nyala and were on our way to the skinning shed when I spotted the top of a kudus horns sticking out over a small hill. I backed down and slowly approached to have a better look. This magnificent old kudu bull was lying close to the edge of the thicket. We planned our stalk into the wind â€“ As we approached, the bull stood up and gave us a 100yard broadside shot. Alex made sure and he ran 20 yards and went down. 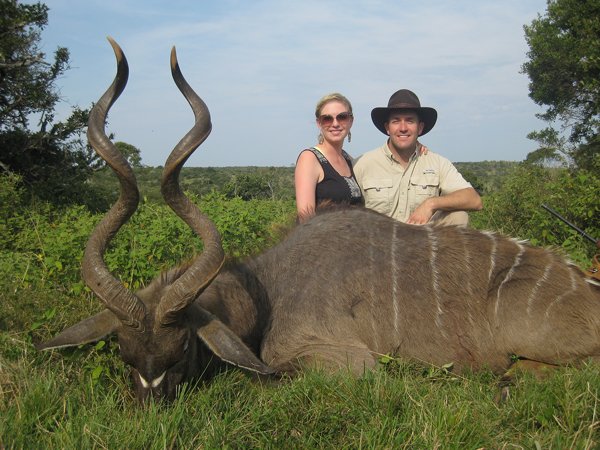 We unloaded the two animals for skinning and made our way up to the picnic spot for lunch. Although a little windy we were still able to enjoy a excellent lunch with a view. 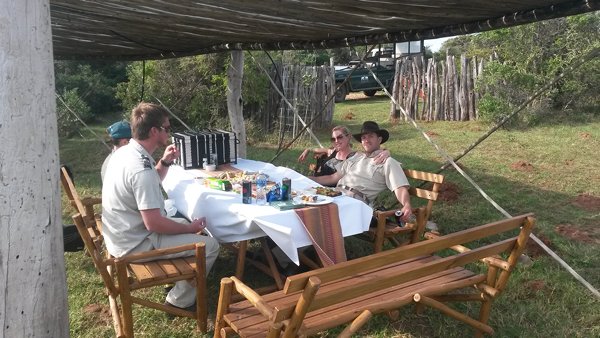 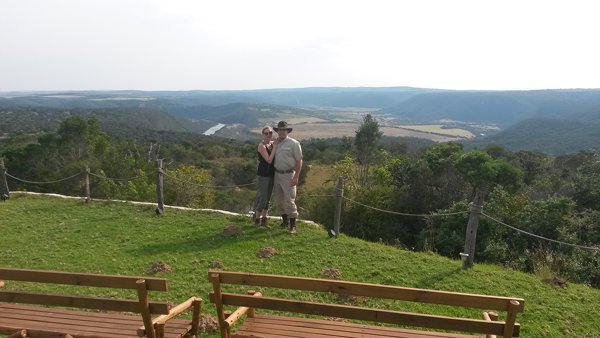 By 2.30pm we are out hunting again â€“ we decided to drive through the bottom of the valley which would be more sheltered. A big herd of impala drew our attention. 50 + ewes with 1 ram. He was a shooter so we made our approach â€“ Alex took another good trophy with one shot. Making my job very easy !! 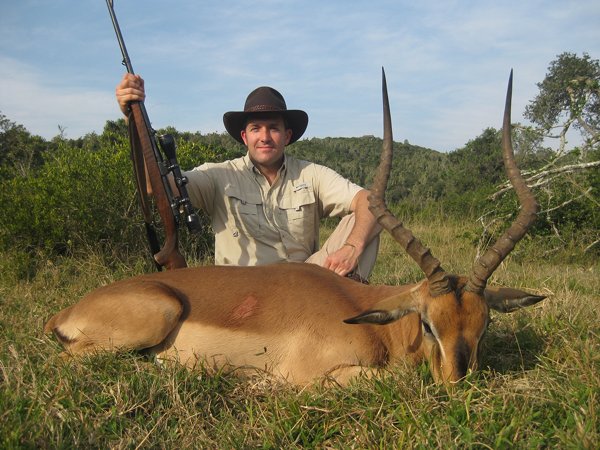 Alex wanted a good waterbuck â€“ we had to go to the far side of the farm across the river. I assured him it would be worth it. Driving down to the river â€“ we saw 2 very good bulls working their way down to a ground dam. We quickly got onto foot but by the time we got there they had given us the slip. We continued on foot moving slowly through the brush â€“ it was getting late and we were pressed for time. There was a small opening in a tree line and we got down on our hands and knees and crawled..... as we peeked into the opening we saw a group of around 10 waterbuck. The two big bulls had joined them. After waiting for what seemed hours â€“ this awesome bull stood broadside and Alex made no mistake. Wow â€“ 32 Inches. Fantastic trophy !! 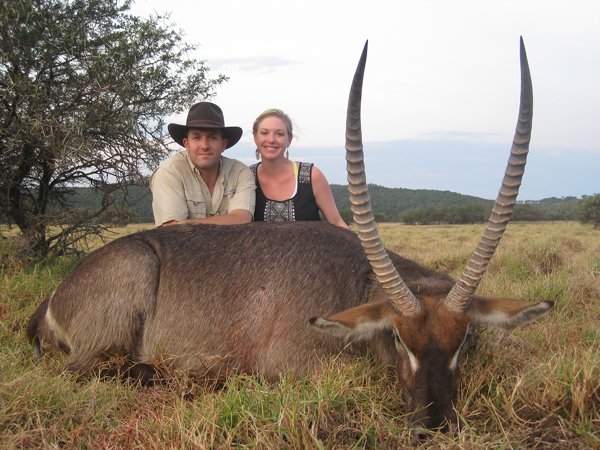 Day 4 â€“ We had dedicated the whole day to the wily gemsbuck. They proved to be just that and we were given the run around the entire morning â€“ spotting very few. The wind had picked up and they had moved into the bush. After spending a lot of time on foot â€“ we stopped for a well deserved lunch break.

Just after 2pm we were back out looking â€“ a got a tap on the roof and our tracker Mondi signalled for me. I climbed onto the back of the truck to get a better view. There was a herd of around 20 in the middle of an open field. They had not seen us â€“ so we planned our approach. We had to be very patient as they have incredible eyes and ears. Sneaking though the trees we were eventually able to take this bull at over 200 yards â€“ great shot Alex ! 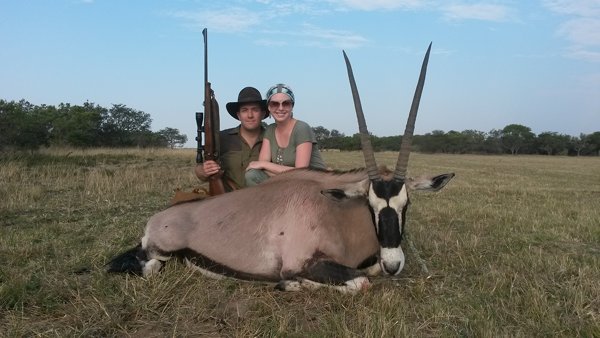 We loaded up and were back on the move â€“ we had seen a herd of over 60 red hartebees & Alex wanted one. Another long walk and they winded us â€“ gone !! Thirty minutes later we were back on the same herd â€“ they seemed to be on the move again and we were moving quickly. I picked out this old bull to the right and he went down with one shot. The sun was dropping and we packed up â€“ another good day !! 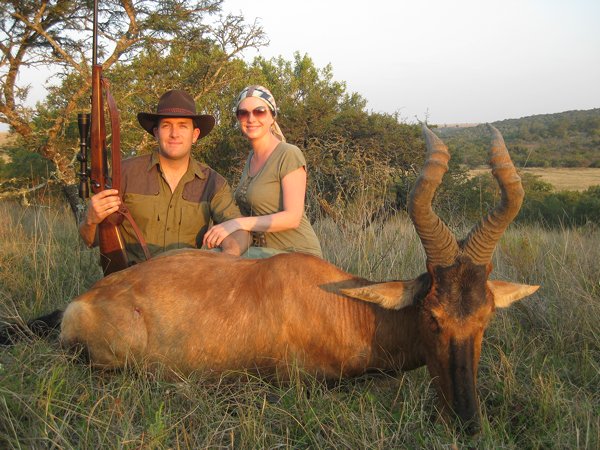 Day 5 â€“ Alex and Katy were leaving today. It had been an action packed safari so far but Alex still had a score to settle with a blue wildebeest. We were out early â€“ we saw quite a few animals but nothing of size. Last hour and we spotted a large herd on the hillside. I told Alex this was our last chance â€“ there had to be a big bull in there. We walked around the hill â€“ staying out of sight and slowly moved up closer. As we came up to look â€“ this magnificent old bull was standing on his own the left. Perfect !!! Alex closed off his safari with a great shot. 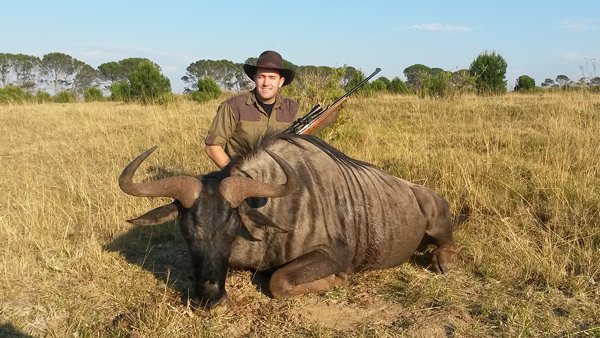 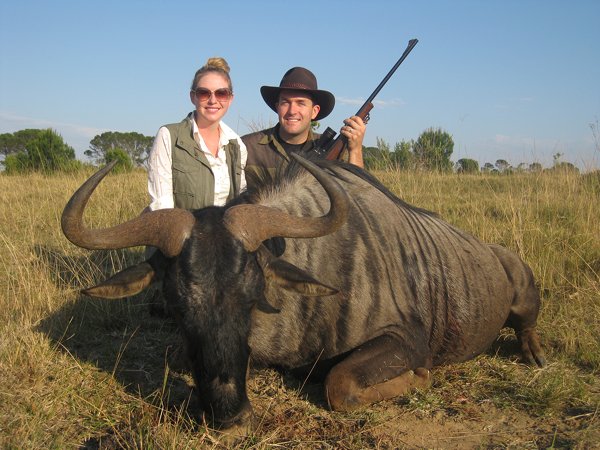 Till we meet again my friends !! Thanks for choosing Eastcape & Karoo Safaris as your preferred hunting destination.